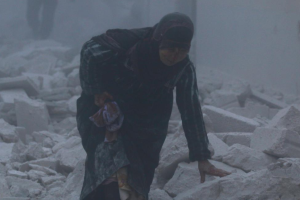 The Syrian army, with the help of Syrian & Russian carpet bombing, has taken over 75-percent of east Aleppo. There are still 62,000 civilians in the part not yet bombed & terrorized into submission.
This woman, injured in an airstrike in the part not taken over, must be one of those “head-chopping organ-eating jihadists” that Assad supporters are always ranting about.

The obscenities of Assadist war-mongering against civilians in east Aleppo betray their protestations of standing for freedom against oppression. They try to mask their profound Islamophobia & hatred for working people & their sycophancy to Syrian & Russian state power by posting feverishly about Yemen & Standing Rock. But the chilling intemperance of their language is unmistakeable.

The hell with the hateful war-mongering about liberating Aleppo. If you are cheering on the carnage wrought by bombing civilians, you cannot call yourself antiwar–even if your enthusiasm is based on ignorance.

The only principled antiwar demands are:
–end Syrian & Russian bombing in Aleppo;
–immediate, unconditional withdrawal of all US, Russian, Iranian, & every other foreign military out of Syria, including covert operations.