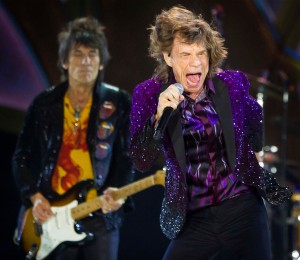 And here we have the very picture of ignominy: the Rolling Stones performing in Tel Aviv despite appeals to them to stand against apartheid by honoring the cultural boycott of Israel. This performance as jester to ethnic cleansing comes as no surprise since Sir Mick, who prides himself on giving the middle finger to convention, has admitted to an affinity with Margaret Thatcher (he was disgusted by the jubiliation at her death) & of course Betty Windsor who decked out his bony ass with feudal honorifics.

Other than that, there isn’t much to say about our man except “for shame.” Petulant minds will however note how plug ugly a man becomes when he turns his back on massive injustice.

Use the photo for hurling horse manure.