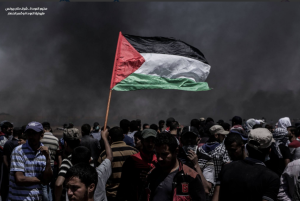 The term “Zionism” is not an epithet. Nor is anti-Zionism a mask for social hatred of Jews. The Exodus mythology justifying Israel’s foundation is unraveling & the dystopian vision of Zionism stands exposed by the barbarous excesses of Israeli genocide in Gaza. There is no Biblical or historic claim to Palestine by Jews from around the world. The Pentagon can arm Israel to the teeth with the latest high-power armaments, drone bombers, F-35 stealth fighters, & Iron Domes but it cannot give Israel justification for colonialism, apartheid, & the expropriation & genocide of Palestinians. Israeli apartheid has no real theoretical defense. That’s why their only defense is to demonize Hamas & try to identify anti-Zionism with social hatred of Jews. But Zionism’s demise is written in its mission.

Zionism is a rightwing ideology originating in the late 19th century in response to persecution & pogroms against Jews in Europe. It emerged in an era when European colonialism in Asia, Africa, the Americas, & Pacific was starting to be addressed by progressive political forces. Dividing up the world & competing for plunder was a fundamental conflict between nations which led to the first World War. The socialists of the day believed racism & colonialism should be challenged & historically vanquished or it could destroy humanity. Zionist ideologues, based on their privileged class, were hobbled in their vision of freedom from persecution by a belief in the superiority of Jews & a rejection of any kind of assimilation like modern nation-states entail. Thus Zionism, in the historic contest between colonialism & social freedom for all, chose to side with colonialism, adopted its methods & perspectives to set up a Jewish-only state, & rejected the broader struggle against racism & colonialism.

The Jewish holocaust of WWII was part of European colonialism. What distinguished it was not the extreme barbarism against Jews. Europe & the US were long-involved in unimaginable crimes against Indigenes & black & brown-skinned peoples. Even the massive Atlantic slave trade is only a part of that horrific history. What distinguished the holocaust was that barbaric practices honed against colonized peoples were now being turned on European peoples in the metropolitan center.

After 70 years of Zionist terrorism & colonial expropriation, of standing alone as US & European powers abetted Zionists in setting up a country on their lands, Palestinians are finally marshaling the forces of justice & human rights around the world to stand with them. As Palestinian solidarity & the cultural & economic boycott (BDS) of Israel grows, Zionists will become more rabid. An Israeli law firm just won damages in a US federal court against the PLO & Palestinian Authority for fomenting terrorism. They have already begun to go after BDS groups as hate groups. Palestinians are up against the most powerful & reactionary forces in the world. They have not been daunted for 70 years by the odds against them. Nor should we be.

{This slightly edited elaboration of the character of Zionism was written in 2015. I’m reposting because it’s important to understand the political ideology of Zionism which is part of white supremacy. Jews have long played a progressive role in politics and it’s tragic that some were siphoned off by Zionism. But that is changing again and more Jews are playing a leading role in the struggle against Zionism.}