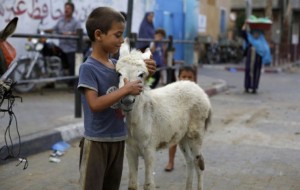 In even the worst of human tragedies, there are always moments when human beings reveal the stardust we are born from. This little guy with his baby donkey is at the UN school in Beit Lahiya (north Gaza) where his family took refuge after evacuating their home. Even in hell holes, humans can make magic.

It was the Italian reporter & passionate advocate for Palestinians, Vittorio Arrigoni (murdered in Gaza in 2011), who popularized the mantra “Stay Human” from a compilation of his reportage on Gaza. The reminder not to lose our humanity in the struggle against barbarism is a caveat that includes Palestinian supporters–that we never stoop to violence or vituperations that even come close to antisemitism. Jews & Judaism are not the problem; in fact, thousands of Jews sensitized to injustice through centuries of pogroms, were central to building the labor movement & other social justice movements in many countries. Zionism in league with neoliberal colonialism–implicating the US, European countries, & other nations like India–is the problem. If we become so desensitized that we turn venom on Jews, we render ourselves not just useless but impediments to the struggle for Palestinian justice & human freedom.

There are several photos of abandoned donkeys scouring for food in garbage since being abandoned by fleeing caretakers. Maybe they’ll survive the bombing; maybe they won’t. Israel has enough war crimes charged against it now (per international law & ignored by everyone except Palestinian supporters) to keep an army of human rights courts busy for a long time. But somewhere among the catalog of charges should be one about the reckless endangerment of animal welfare.

Reports are coming in of solidarity protests in Madrid, Firenze, London, Dublin, & elsewhere, with others scheduled in Washington DC, Los Angeles, Fresno. Grab a placard demanding “Stop the massacre in Gaza” & head out. If you cannot participate, join the economic & cultural boycott of Israel (barcode beginning 729).