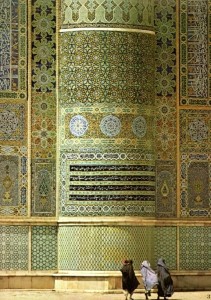 Look at this magnificent structure; consider the mathematics, engineering, architecture, craft, artistry, sheer brilliance of it’s conception, design, construction. The building, most likely a mosque, is from Afghanistan–though after 14 years of US-NATO bombing we don’t know if it’s still standing since mosques were so often targeted.

US-NATO war propaganda is so at odds with this image. Do you think the Pentagon & its European stooges might be lying to us? That Afghanistan really never needed emancipation US-style? Because in the US, there is nothing to compare unless one considers the White House an architectural masterpiece & not an eyesore.