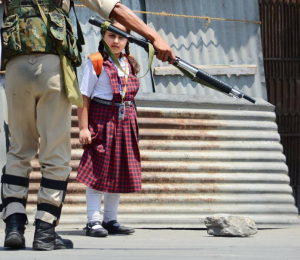 A little Kashmiri girl & an Indian occupying soldier: a picture worth a thousand lies. What concerns Indian Army General Bipin Rawat is not nuclear & chemical weapons falling into the hands of Kashmiri terrorists but the resistance of children, teens, & adults to occupation & their demand for self-determination. The Indian government has a monopoly on weaponry but it still cannot control the demand for freedom.