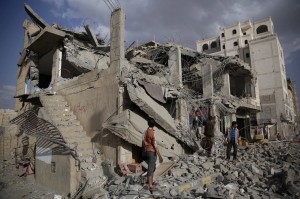 The killing fields of Yemen–now being democratized by a Saudi-led US-backed alliance of feudal monarchies & military juntas bombing it to smithereens. You can’t tell the difference between Yemen, Syria, & Gaza.

The old saying that ‘politics makes strange bedfellows’ needs to be updated for the neoliberal era, the barbaric phase of capitalism. There’s nothing strange at all that the US & UK are in league with Saudi Arabia, a regime that started the new year with a mass beheading of 47 people on January 2nd & which has been bombing Yemen since March of last year.

Last year, we learned of the extent of the Obama administration’s involvement in the merciless bombing with increased arms sales & logistical & intelligence support. Now we learn that under Cameron the UK increased bomb & missile exports to Saudi Arabia from £9 million to £1 billion just over three months last year.

It now stands exposed that UK military advisers are sitting in Saudi war rooms providing instruction & assistance to the bombing in Yemen, using British planes & bombs targeting schools, homes, & the healthcare system. It’s reported 130 medical facilities have been taken out by bombs; 2.4 million have been driven from their homes; 14 million are “food insecure,” with half on the starvation point & no access to clean water or sanitation; nearly 19 million out of 24 million Yemenis are now dependent on humanitarian aid for survival–with no report on how much aid is actually being delivered in the middle of a killing field. Saudi Arabia doesn’t have the lock on barbarism.

The bombing has killed an estimated 6,000 Yemenis. Some reports say half of them are civilians; other reports claim an estimated 93 percent are civilians. Who the hell would the others be? There are reports of 10,000 Saudi ground troops & thousands of mercenaries deployed by the United Arab Emirates but no reports about the Yemeni military in the field.

A UN panel investigating the bombing campaign issued a 51-page report exposing “widespread & systematic” attacks on civilian targets & raising questions about the role of the British military advisers. The UN also says the naval blockade & bombing have created a “humanitarian catastrophe” in Yemen & involve violations of international humanitarian law. Well what about some UN sanctions then against the Saudi coalition, the US & UK–like they imposed on Iraq to justify US bombing?

The people in this photo are inspecting a house in Sana’a, Yemen which was destroyed by a Saudi bomber made in Britain under the direction of British advisers using US intelligence.

End the bombing in Yemen!