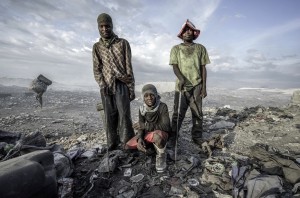 Capitalism is just an inexhaustible source of creativity. It puts feudalism to shame on that score. Here, for example, in Port-Au-Prince, Haiti. Under neoliberalism, the barbaric phase of capitalism, waste management is considered an unaffordable luxury for cities. So they transport tons of it to countries they’re trying to re-colonize to provide work for the legions of unemployed who earn a few bucks a day scavenging through animal poop, dirty diapers, rotting food, swill to find plastic & other recyclables. Now isn’t that creative!? Such barbarism could only have been thought of under capitalism.