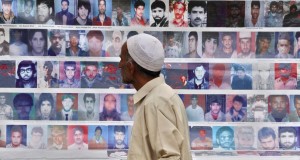 The man in this photo is a relative of a Kashmiri youth disappeared by Indian occupying forces at a 2011 protest in Srinagar organized by the Association of Parents of Disappeared Persons (APDP), an active & prominent human rights group. Photo montages of victims are an ubiquitous feature of political protest against disappearances everywhere in the world. They still display them for the disappeared in the Spanish Civil War between 1936 & 39. The montages are a way for victims to haunt justice.

The systematic news blackout explains why so many people know nothing about the Indian occupation of Kashmir. But no government in the world can make a claim for ignorance. For years, human rights groups (Kashmiri & international), activists, journalists, filmmakers, have documented, litigated, agitated, educated about the violence & politics of the occupation making Kashmir the most militarized zone in the world. They have repeatedly brought their case to the UN.

The US position on Kashmir–notwithstanding some mealy-mouthed comments by Obama at election time–is the same as the UN: that Kashmir is disputed territory between India & Pakistan & the conflict must be resolved by negotiations between them, “taking into account the wishes of the Kashmiri people.” Self-determination of Kashmiris is simply left out, as if they were pawns in a power play between India & Pakistan. The US position on Kashmir is more clearly understood by its military relationship to India–as the largest recipient of US military aid since 1946. If the US objected to the occupation, it would stop the flow of arms & aid used against Kashmir.

The US can’t claim stupid on human rights crimes committed by Indian military & paramilitary forces in Kashmir. We know from leaked diplomatic cables published by Wikileaks that in 2005 the International Committee of the Red Cross (ICRC) informed US diplomats in Delhi about the widespread use of electrocution, beatings & sexual humiliation against thousands of detainees by Indian police & military.

Amnesty International & Human Rights Watch have both issued several reports on the use of torture, disappearances, summary executions in Kashmir. The Jammu Kashmir Coalition of Civil Society (JKCCS) was founded in 2000 as a human rights coalition which includes the Association of Parents of Disappeared Persons (APDP) & the International Peoples’ Tribunal on Human Rights & Justice in Indian-administered Kashmir (IPTK). (The human rights lawyer Parvez Imroz is a founder of JKCCS & a convenor of IPTK.) Those organizations issued major investigations with documentation in 2009, 2012, & 2015 on torture, disappearances, & other human rights crimes.

The use of sexual violence & humiliation as part of torture has been partially documented but the use of mass rape remains insufficiently documented. Part of the reason, of course, is the stigma & reluctance of victims to give testimony but also because of fear from the occupying forces. Entire families are punished if one of them is suspected as a dissident; many are harassed repeatedly; others are themselves arrested & tortured.

Under the Armed Forces Special Powers Act (ADSPA) in force since 1990, Indian troops in Kashmir are shielded from prosecution for human rights crimes. It legalizes criminality & impunity & is similar to agreements the US has imposed on the regimes in Iraq & Afghanistan. Last September, an Indian army court martial for the first time gave life sentences to six of its personnel for a 2010 fake encounter incident in Machil, Kashmir where they murdered three young men on the pretense that they were “foreign militants.” Kashmiri human rights activists don’t expect those sentences to hold but to be overturned (just like Lt. Calley from the My Lai massacre in Vietnam). As we know from almost weekly reports, such fake encounters & executions remain a constant feature of the occupation.

The troops who engage in acts of violence should be prosecuted but they are functionaries in the larger system of military occupation. The only reason they are given impunity is to protect the army high command & Indian government from exposure, condemnation, & prosecution. This partially explains why the Indian army now often uses “unidentified gunmen” rather than uniformed officers to carry out raids, home invasions, & executions.

The resolution to this is not negotiations between India & Pakistan but the immediate, unconditional withdrawal of India from Kashmir & the right of Kashmiris to determine their own fate. That’s what self-determination means.

India out of Kashmir! No US aid to India!