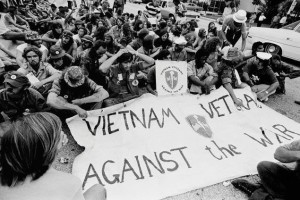 While the US Pentagon uses Memorial Day to celebrate war, these veterans remind us of the crimes committed overseas in our names. And when they return to civilian life they, their families, & US society pay a price in PTSD, addiction, mental illness, homelessness, incarceration, suicide, violence. The antiwar movement, including its veteran activists do not glorify soldiers; nor do we vilify them.

These are excerpts from a talk I gave in Minneapolis to raise funds for Winter Soldier 2008. It pales in comparison to the indictments of war given by veterans but is intended as a tribute to antiwar veterans who continue to play a pivotal role in building opposition to US wars:
———–
“Of the many important participants in the antiwar movement—students, churches, women, civil rights groups, unions—there is one constituency with a towering moral authority no one disputes, and that is the veterans and active duty Gis. Their opposition to war cuts, like nothing else can, through the patriotic jingoism, racism and lies that justify war. That’s why the proponents of war are so relentless in trying to create antipathy between veterans and the antiwar movement. Everyone’s heard the story about Vietnam vets being met at airports by taunting and spitting protestors? This ugliest of slanders is intended to alienate people from the antiwar movement, in particular to isolate and demoralize veterans with misgivings or opposition to the war. It gives them no place to go for support.

In the early antiwar movement there was some confusion and discussion about the value of reaching out to veterans and Gis—but no one ever saw them as the enemies of peace; some doubted they could overcome the military brainwashing or stand up to the harassment they would certainly receive. That confusion decisively ended when hundreds and eventually thousands of vets and Gis began organizing against the war and made their opposition public with newspapers, petitions, and demonstrations and they approached the antiwar movement for collaboration and support.

Without the support of a mass civilian antiwar movement they were subject to intimidation, court martial, prison time, and often charges of mutiny or desertion in time of war, which carry a maximum penalty of death. You may not know that all of this was true in the first Iraq war in the early 90s. Black and Latino soldiers played a major part in this resistance because they were so outraged at the racism of the war against the Arab peoples.

As a result of our collaboration, defense campaigns were waged and demonstrations held to keep Gis from being prosecuted and jailed. We marched with veterans reaching out to soldiers and to support those victimized for exercising their legal right to oppose the war.

The respect we have for these brothers and sisters in the antiwar movement is signified by the fact that even today all marches are led off by contingents of veteran’s and Gis because they are a direct rebuke to the demagogues calling racist wars a fight for freedom and democracy. Thousands have been inspired and persuaded to oppose the war by their public speeches and protests

Many of the veterans who have been involved in this work for now more than 40 years are here tonight. They’re probably too modest to stand up and identify themselves but I think we should tip our hats to them and express our respect and gratitude for the remarkable contributions they have made to advancing civil liberties, the causes of peace and antiracism, and to making this a suitable world for human beings to live and love in.”

(Photo from the archives of the anti-Vietnam War movement)