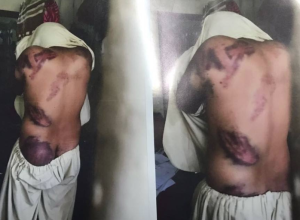 The Guantanamo phenomenon in India’s treatment of Kashmiri prisoners at Tihar jail near New Delhi:

It isn’t reported whether the Kashmiri prisoners being assaulted are incarcerated for criminal offenses or if they are political prisoners. Neither would justify physical assault but it is probably more the latter since this is the prison where Kashmiri freedom fighters Maqbool Bhat & Afzal Guru were hung (Bhat in 1984 & Guru in 2013). India still refuses to return their bodies for respectful burial in Kashmir by their families & those they continue to inspire.