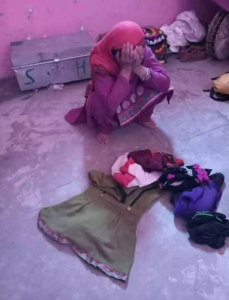 We now know the gruesome details of the abduction, gang rape, & murder of little Asifa Bano last January in Jammu. From the fields where she was abducted, she was taken to a nearby Hindu temple & brutalized & gang raped for several days. Police have arrested eight men for the crime & say they have forensic evidence to prove their guilt, including DNA. Two of those arrested are policemen who accepted bribes to cover up the crime.

Asifa’s family are members of a Muslim oppressed caste living in Hindu-majority Jammu. Their community began protesting almost immediately because they knew their demands for a fair investigation would fall on deaf ears in a region where Hindutva nationalism is emboldened. There were also solidarity rallies in Kashmir demanding justice for Asifa. This monstrous crime against a little girl is a political crime involving gender, ethnic, religious, caste, & class oppression. Because of its savage character & the role of social media, it has received widespread international coverage & condemnation. To counter this, Hindutva political forces in Jammu mobilized by holding protest rallies, including one where high ministers in the government from India’s BJP (the rightwing ruling party) addressed the nationalist crowd gathered to defend the perpetrators. Hindu nationalist lawyers from the Jammu bar association, claiming Hindus were being victimized, protested to prevent charges from being filed in court & reportedly threatened a Kashmiri woman lawyer handling the case.

Now articles are appearing about the rise of communalism in Jammu & Kashmir, about the ‘fueling of religious tensions’ between Muslims & Hindus, as if they were primitives going at each other over theology. That’s like saying the conflict between the Nazi party & Jews or Roma was communal conflict. What is left out is the power relationship between Hindutva nationalists who run the Indian government, including the state of Jammu & Kashmir, & Kashmiri Muslims who are under occupation or oppressed castes who face the extremes of caste violence–like the gang rape, brutalization, & murder of a small child.

The extreme rightwing in India will use this incident to incite violence against Muslims, including Rohingya refugees living in Jammu, & against oppressed castes. Demanding justice for 8-year-old Asifa Bano has become part of opposing anti-Muslim pogroms in India, opposing the occupation of Kashmir, the defense of oppressed castes, & the defense of Rohingya refugees. They are all of a piece in the matrix of Muslim & caste oppression in India.

This photo is Asifa’s mother grieving over her child’s belongings. Charges have been filed in court but that’s still a long long way from justice. Until this small child gets justice in the prosecution of the eight men, this mother’s grief is our grief.