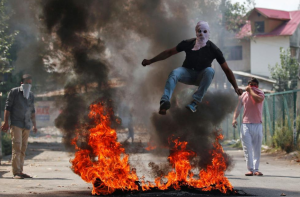 In his opening speech, as per his routine, Zeid briefly catalogued countries requiring immediate investigations, including Turkey, Bahrain, Ethiopia, Yemen, & Syria, & denounced them for refusing to cooperate. Whilst the Council met yesterday, India rejected his request for an investigative team to Kashmir.

India’s refusal of a UN fact-finding team in Kashmir should have brought immediate censure from the Council since India is one of the 47 member countries. But if egregious human rights violations prevented membership, most of the Council members would be disbarred, including also the Philippines, Congo, the UK, Bangladesh, France, Ethiopia, Mexico, Saudi Arabia, China, Indonesia, Russia. Reid, a prince from Jordan, should himself be disbarred since he is part of the monarchy which rules Jordan, a country accused by many sources of monstrous human rights violations, especially against refugees from Syria, Palestine, & Africa & against sweatshop workers.

Why is the Council allowing Saudi Arabia, which beheads & crucifies dissidents, not just to sit on the Council but to head up a panel which selects the top officials who formulate international human rights standards for the UN? When Saudi Arabia was chosen it had reportedly beheaded more people that year (2015) than ISIS. Saudi Arabia has also obstructed an investigation team for war crimes in Yemen, which it has been bombing for over 1 & 1/2 years with armaments from the UK which also sits on the Council. Why did Zeid, under pressure from the Saudis, remove the Saudi-led bombing coalition from the Council “List of Shame” for killing & maiming children & targeting schools & hospitals in the bombing.

According to media reports, Zeid emphasized Syria’s refusal to allow an investigative team because it “is believed to have gassed its own people; has attacked hospitals & bombed civilian neighborhoods with indiscriminate explosive weapons; & maintains tens of thousands of detainees in inhuman conditions.” Is a UN team required to document these crimes since photographic evidence is all over media? Can’t the UN seek necessary documentation about who is bombing from US & Russian surveillance systems–& if they refuse, include them in the indictment? Syria should be strongly censured so antiwar activists can stop supporting Assad as a beleaguered champion of democracy. But so should India, the UK, US, & Saudi Arabia be censured in no uncertain terms. Those who seriously concern themselves with human rights & war crimes don’t play politics with the perpetrators.

No one should be too disappointed that India has refused the UN investigative body access to Kashmir. In July 2014, when Israel was bombing Gaza to smithereens & directly targeting hospitals, schools, refugee centers, residential areas, the Council said there was “a strong possibility” of Israeli war crimes. In a report issued in June 2016, the Council said Rohingya “may be” victims of “crimes against humanity” by the Myanmar regime under Aung San Suu Kyi because they are subjected to forced labor, sexual & other violence, persecution. The public documentation of pellet munitions is all over media, including Indian media. That alone should evoke the strongest condemnations from the UN Council. Such condemnations will not be forthcoming.

UN Human Rights Council reports on Iraq & Afghanistan never mention US military intervention but only cite ISIS & Iraqi & Afghan government troops for war crimes. It’s beyond dispute they are engaged in war crimes but what about US bombers, ground troops, mercenaries, CIA agents & their torture prisons?

Any farmer can tell you that you can’t put a fox in charge of the chicken coop. You cannot put the worst human rights violators on the planet in charge of monitoring human rights & expect them to come up with anything different than the crap the UN Human Rights Council dishes out for public consumption & deception.

Photo published by Reuters is Kashmiri protester jumping a fire. What does the UN human rights agency think is going on here? A parkour competition?