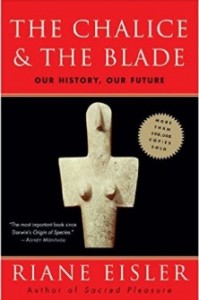 Rereading “The Chalice & The Blade” by Riane Eisler on the role of the matriarchy & women divinities in Paleolithic & Neolithic times is a refreshing return to feminist theoretics. It may seem blasphemous to many but in those eras covering tens of thousands of years of human history, the divine was female & the social structure matriarchal.

Of course in trying to reduce women to busty pin-ups or dowdy housewives, that history had remained unacknowledged, unexplored, even vigorously disputed & erased for centuries despite overwhelming anthropological evidence. The slanderous, demeaning notion that prostitution was the oldest profession for women took deep cultural root when in fact the oldest profession for women was farming in a universe reigned by goddesses.

With the emergence of feminism in the 1960s & 70s, female scholarship on that heritage began to get published & inspired other women to research the contributions of women to human civilization–as political figures, farmers & agriculturalists, inventors, writers, musicians, poets, scientists. It was the same kind of historical process as Black & Latino scholars retrieving the history of those nationalities in the Americas & as other scholars around the world refuting the narrative that made Europe the genesis of human civilization by writing off tens of thousands of years of contributions from Africa, Asia, & the Middle East.

The upshot of this process is that women took back our place in human history & asserted our contributions against the erasures of patriarchal dominance. But in the past few decades, a patriarchal backlash has developed disguised as progressive critique of feminism & trying to again silence the voices & presence of women.

Much of this backlash is led by leftists, including women, who are opposed to feminism. They promote prostitution as “sex work”; defend pornography as sexual freedom; herald bare-breasted protesting as the resurgence of feminism; lash out in incomprehensible screeds against “identity politics”; vilify feminists who disagree as TERFs & SWERFs; & in general try to shout down feminists who take issue to the backlash of opposition to feminism disguised as avant-garde politics.

One can see the same process of erasure, not just of feminist critique but of the female, in gender theoretics. Despite the fact that violence against women is an international horror putrefying every aspect of social life, we are supposed to deny that reality to accommodate a spectrum of genders that diminishes or does not include women.

You can call that progressive all you like; you can attempt to shout down women who object to erasure. But feminism is not going away because patriarchy is reasserting its claim against us. Been there for a millennia, done that. This is the era of female emancipation. And for the record, we are women. Not cis-women.