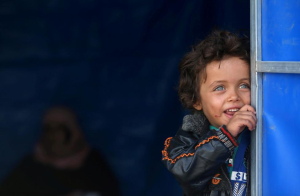 To update Marx: “All that is solid melts into air, all that is holy is profaned, & human beings are at last compelled to face with sober senses our real conditions of life & our relations with our kind.”

What has not changed overnight is the barbarism of war, occupation, & genocide in several countries nor the responsibility of men & women of good will around the world to unite & oppose them whatever military force conducts them.

This is Mosul, Iraq, a killing field of US militarism since 1990, now being fought under the rubric of fighting ISIS. This child, one of thousands displaced by the war, lives in Khazer refugee camp near Mosul.

Progressives around the world need to get over electoral idiocies & disappointments to forge unity against the unfolding of Armageddon in the Middle East.

US out of Iraq & Afghanistan! Stop Syrian & Russian bombing of civilians in Syria! US, Russia, Iran, & all foreign military forces out of Syria.