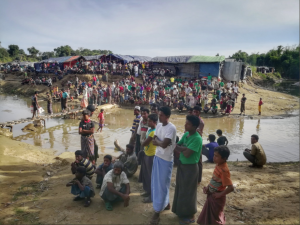 The US has what some would call a “nuanced” policy toward the fascist Burmese government. It is more bluntly characterized as a contemptible charade to protect US investments in Burma’s neoliberal ‘gold rush’. After initial denials, the US quietly characterized the Rohingya genocide as ethnic cleansing. But to sustain the mythology of a civilian government led by Suu Kyi forging democracy, the US has only sanctioned General Maung Maung Soe who led the genocidal offensive in Arakan state. No sanctions at all against the military commander-in-chief & architect of the genocide General Min Aung Hlaing or of Suu Kyi who fronts for the military.

What the sanctions on Maung Maung Soe mean is that the US Treasury will freeze his US assets & Americans can no longer deal with him. Does he even have any US assets? Did any Americans even have any dealings with him? The Burmese government (which is of a piece with the military) has pulled Soe out of service in Arakan state & said they intend to take punitive action against unnamed officials who allowed the Arakan Rohingya Salvation Army (ARSA) to spread in the state. The issue of extrajudicial killings, massacres, torture, mass rape, torching of entire villages are not an issue to the Suu Kyi/military government.

Now Thailand, which is also run by a military junta, has invited Burma back to the 2018 Cobra Gold military exercises coordinated with the US Pentagon. These joint war exercises between Thailand & the US began in 1982 & involve thousands of soldiers from 29 countries engaged in live fire exercises; training in biological, chemical, jungle, nuclear, & radiological warfare; exercises with amphibious craft, fighter jets, attack helicopters. A Pentagon spokesperson claims Burma is only invited to observe the humanitarian assistance & disaster relief portion of the exercises. The Chinese & Russian militaries which are arming the Burmese junta are also invited as observers. What kind of crap is it that pretends Burma, China, & Russia require training in humanitarian assistance? In Arakan state? In Syria?

What monstrous cynicism & duplicity this whole observer thing is. The genocide of the Rohingya people has barely ended. There are thousands of Rohingya refugees stuck in no-man’s-land on the Burmese side of the Naf River unable to enter Bangladesh & with the Burmese military pointing assault rifles at their backs. At the same time, the Burmese army has escalated bombing & long-range shelling against the popular struggle in Kachin state which has displaced tens of thousands.

The photo is Rohingya refugees who are prevented from crossing this bridge to asylum in Bangladesh except for emergency medical care. They report that Burmese soldiers are in the hills behind them menacing them with guns.