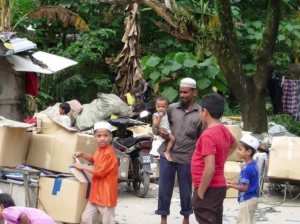 This is an account by a Rohingya refugee in Malaysia of the life of another Rohingya man. It is a story repeated for undocumented immigrants all over the US, particularly in the border region, & all over the world. Refugees are not pitiful creatures but human beings with sacred inviolable rights due them simply because they are human. Open the damn borders.
********
“He is a Rohingya from Myanmar. He fled to Malaysia by boat because of persecution by Myanmar militaries. He is surviving in Malaysia more than five years. He went to UNHCR office many times since he arrived to Malaysia. Unfortunately, he didn’t get the opportunity for the registration and medical facility.

For his daily base, “He wakes up early to collect plastic and metal to sell. On a good day, he can make around RM30. But not every day is a good day. There are days when he only makes RM20,” He has been doing this since he arrived to Malaysia. He can’t find any job. He has a wife with five kids living in Batu 4. Apart from this, nobody helps either. What choices does he have on for his family?

As we know, Refugees in Malaysia are officially prohibited from working, so most of them seek employment illegally in order to support their families. This desperation places them in a perpetually precarious state where they are left at the mercy of their employers. Sometimes they are made to work long hours for cheap pay. Sometimes they fire from the job. Sometimes they are exploited. This is a problem repeatedly I raised everywhere.

Despite carrying valid UNHCR documentation, often face the risk of arrest by the authorities. Even though I have encountered with the authorities several times while I was working at restaurant as waiter and UNHCR as an interpreter in Kuala Lumpur & visiting some places. Often leading me to having to bribe police to escape detention for few days or 13 days until asking from UNHCR. “That’s become normal for Rohingya in Malaysia.”

This is the concrete life of Rohingya in Malaysia. we continue to live here. Struggling to keep our dignity as we fight to survive.”

(Photo is the fellow Ziaur is describing with his children)