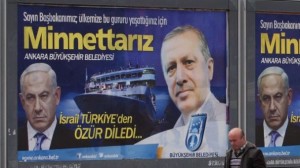 If there’s one thing the attempted Turkish coup is making evident, it’s the riot of delusions that so many have about Turkish president Erdogan & about the character of his rule.

On Twitter, a leading Palestinian supporter mocked the notion that Erdogan would conduct a purge if he survived the coup. As of yesterday, only three days after the attempted coup, he had already fired 24,000 teachers & 1,577 university deans & dragged in 7,500 alleged plotters. Will they face trial or just disappear in the gulag?

Others are lauding the survival of Erdogan as the “democratically elected” president when his 2014 election campaign was riddled with corruption charges from international observers. Many are completely ignoring his violence against Kurds, his repression of democracy protesters, his raids on newspaper offices & arrests of reporters, his unsavory agreement with the EU for accepting deported refugees in return for money.

Some Assad opponents are calling on Erdogan to militarily enter the war in Syria against Assad. The credulity is beyond tragic, not to mention foolish, since as the second largest force in NATO, Turkey is already involved in Syria in many ways, including allowing the US to use its airbases.

Some have been taken in by Erdogan’s support for Palestinians, most notably in the 2010 humanitarian Mavi Marmara flotilla to the Gaza Strip that was attacked by Israeli commandoes who killed several Turkish activists. Perhaps the deluded are unaware of the diplomatic rapprochement between Israel & Turkey brokered in 2013 by Obama where in exchange for an apology for the attack & $20 million in compensation Turkey would normalize relations with Israel. Maybe they don’t know that two days after Erdogan formalized the reconciliation agreement with Israel in late June 2016, Erdogan threw the organizers of the 2010 flotilla under the bus by publicly asking, “Did you even ask me before you set sail?”

There is an alternative to the autocracy of Erdogan & that of a military junta. That alternative is the democracy movement in Turkey. Standing against the coup does not mean standing with Erdogan. The distinction is not subtle & should not go over the heads of so many who support democracy in Turkey.

The photo is a billboard in Ankara, Turkey in 2013 with photos of Netanyahu & Erdogan celebrating Israel’s apology.