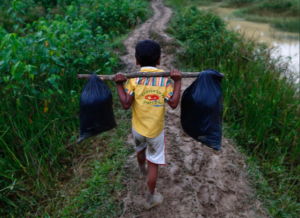 Hard to even imagine the terror of small children fleeing military & nationalist death squads after witnessing genocide, especially the terror of those children who have lost their parents & are fleeing on their own. According to media reports, there are thousands of such children crossing the border into Bangladesh. With chaos in the refugee camps, these little kids are sitting ducks for predators posing as charitable organizations or parents.

We need to raise a hue & cry to demand thoroughly vetted child welfare providers be on hand to act as long-term guardians & to make sure no child slips into the hands of traffickers. That is a human right priority.