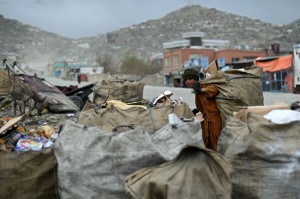 The media caption to this photo read: “A young rubbish collector works at a dump site” in Kabul, Afghanistan. In fact, he’s a kid, a young boy & he’s not a scavenger looking for recyclables but a rubbish collector for the city.

What the caption editor should have said is: “This is emancipation US-style. Child labor has increased under the US-NATO occupation of Afghanistan & now tens of thousands of kids as young as six work under dangerous conditions in coal mines, brick factories, construction, carpet weaving, begging, & in toxic dump sites.”

But the plot sickens from there. After 30 years of constant war & occupation, Afghanistan’s infrastructure was in ruins & one of the most pressing problems was solid waste management. From the US-NATO occupation in 2001 to 2004, Kabul, the largest city in Afghanistan, had grown from one million to four million people. The UN reported the growth as returning refugees & “new urban dwellers.” “New urban dwellers” must be a coy way of saying those thousands of rural Afghans fleeing US-NATO bombing in the countryside as well as the armies of NGO & military personnel swarming like predatory locusts into the country.

UN-Habitat, the agency dealing with urban development, boasted they handed a grant of over $840,000 from the World Bank to the municipality of Kabul to develop a waste management program. They claimed the program cleared mountains of accumulated waste from dump sites around the city. USAID also reported funding a waste management program for the municipality including logistical assistance–first in 2004 to 2007 & again in 2010 to 2013. Now this is quite disturbing because it suggests (actually it confirms what we already knew) that the US as well as the UN & World Bank are aware children are employed in a dangerous occupation where they are susceptible to disease, not to mention vermin.

The more we know about the war in Afghanistan, the more we understand it must be actively opposed.