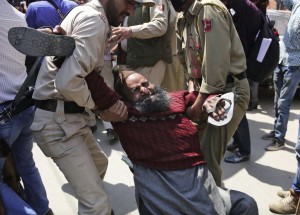 In the not very distant past, those with disabilities of any kind were warehoused in state institutions under barbaric conditions including abuse of all kinds–at least in the US. They were looked down on as inferior, substandard human beings. That denigration took root in language & still manifests for those with intellectual disabilities, including adding -tard as a suffix in terms of abuse. (Stupid is a social condition, not a designation for disability.)

It appeared to be progress when US states closed down those institutions in the late 1960s-70s but they did not provide alternative social services like housing, counseling, advocates, & many ended up homeless.

It was a new day rising when those with disabilities began to organize themselves politically in the 1970s to demand equal rights & the end of flagrant discrimination, marginalization & social isolation in every aspect of life.

There were frequent photos of protesters in wheelchairs during the Arab uprisings, during the Greek austerity protests, in the Occupy movement protests–all fighting as peers. There are frequent photos of refugees disembarking from dinghies in Greece on wheelchairs & joining other refugees in rushing the border fence between Greece & Macedonia. They also are engaged in battles with their own governments to provide social services & social security still denied them–not to mention destroying the popular & institutional prejudices against them as inferior human beings.

Several times, most recently two weeks ago, disability activists on crutches & in wheelchairs in Bolivia marched on the capital to demand an increase in their paltry social security benefits. This photo is an activist of the Jammu & Kashmir Handicapped Association being arrested by Indian police at a protest for disability rights in Srinagar. Media reports that over a dozen activists were arrested, some of them on crutches or in wheelchairs.

The activists, marching behind a banner reading “We want justice, we want rights,” were demanding the reservation of government & private jobs, concessions on electricity & water bills, subsidies on loans, & social security of 6,000 Indian rupees (around $90) each month. India does not have social security so that demand is extremely avant-garde & strengthens the political struggles within India proper for social security.

Because of so many barbarous wars, disability rights has become a central issue in politics–& not just for the veterans who fight them: hundreds of thousands of people in Gaza, Iraq, Afghanistan, Pakistan, Kashmir, & elsewhere have been disabled.

There is an ideology behind denying those with disabilities full stature in social & political life. It’s the same genre as racism, misogyny, & supremacist views of all kinds. The historic mission of humanity is to overcome such rancid impediments & make this world suitable for all human beings to live in.