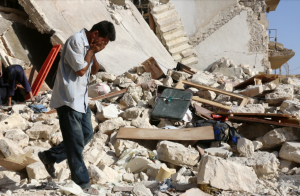 There is a growing clamor for a No Fly Zone (NFZ) in Syria coming from a lot of media & from some opponents of the Assad dictatorship. A NFZ is a geographic area over which aircraft are not permitted to fly. Those calling for a NFZ are appealing to the US Pentagon to impose & enforce it. There is so much wrong with that approach to ending the bombing in Syria that it’s hard to know where to begin. Does anyone in their right mind actually believe Syria & Russia will compliantly allow the US to obstruct their military operations in Syria?

One wishes those promoting a NFZ were simply ignorant of its history & use by the US government. But the likelihood is that many of them are not & are in fact brokering for a more aggressive US military role in Syria. They have illusions that under a Clinton presidency the US will finally go after Assad to take him down. But US policy, by act if not by word, supports the Assad regime because they want to destroy the popular revolution against him. The US has always been able to truck with dictatorships but it has never been able to tolerate a popular democratic movement against them. In trying to figure out what to do in such a volatile situation, the US may have improvised tactics they later had to reverse but their strategic intention is to destroy the revolution against Assad, not to take down the Assad regime.

The elementary thing adherents of a NFZ do not understand is that US policy toward Syria or any other country is not determined by the person in the Oval Office but by the oligarchy (the owners of Wall Street & the corporations) who really run this country through think tanks, special consultants like Kissinger, international cartels, the Pentagon & CIA. Presidents administer policy; they do not formulate it.

The US, in league with the UN, has previously used NFZs in Iraq (1991-2003), Bosnia & Herzegovina (1993–1995), & Libya (2011). Look at the state of those countries today as a result of US intervention, including the use of NFZs, & ask yourself if that is your vision for the emancipation of Syrians from the Assad dictatorship. Those countries are descending into hell & permanent war.

Those calling for a NFZ imposed by the US mask their war-mongering proposal by saying ‘the Syrian people are calling for a NFZ, so how can we deny them?’ Or they talk about how the children of Syria are being bombed to smithereens & say only the heartless & childless could possibly deny them a NFZ. Are they remotely familiar with what the US has done to hundreds of thousands of children just in Iraq? Do they remember that Secretary of State Madeleine Albright, speaking for the Bill Clinton presidency, said the death of 500,000 Iraqi children was “worth it” to accomplish US policy goals in the Middle East? Those who look to US militarism for emancipation will have a lot to answer for to the children of Syria if their proposal for a NFZ is not defeated.

As for their claim that the “Syrian people” are appealing for a US-imposed NFZ–who do they think they’re kidding? Syrian society is as riven with political differences as every other society. There are certainly those who look to the US for military help against Assad because they are desperate & don’t understand the US has been in Syria since 2011 to thwart the popular uprising against Assad. It isn’t the job of antiwar activists to lobby the US Pentagon to switch sides & pull off a humanitarian intervention. Like the so-called humanitarian intervention in Bosnia, it would be a disaster for Syria. Those who hold up the NFZ in Libya as a model need to have their heads examined.

Some claim that opposition to a US-imposed NFZ is a betrayal of solidarity, of taking a position of superiority toward Syrians who know best what they need. Talk to the hand! The fight in this country & around the world is against US militarism–a militarism with nearly a thousand military bases all over this world; that is revving up militarism in Japan, India, Australia, the Philippines, Cambodia, Vietnam; that is bankrolling Israeli ethnic cleansing of Palestinians & carpet bombing of Gaza; that has nuclear war heads pointed at millions of people in this world. US militarism has touched & corrupted the very fabric of US society & of those where it is deployed. Only a fool would look there for emancipation from Assad—especially when the US & Israel are now in a military alliance with Russia in Syria.

There are forces in Syria who damn well know that continued US military intervention in Syria spells Armageddon; who know that NFZs are an instrument of war, not a humanitarian way to end it. Those are the Syrian voices we need to listen to, not to the war-mongers no matter how opposed they are to Assad.

What is the solution for ending the bombing in Syria? There are no quick fixes. The only solution is to re-mobilize antiwar forces internationally to demand Russia, the US, Israel, Syria stop the bombing. And we must organize, agitate, educate about what is really going on in Syria against those misguided forces who support the Assad dictatorship in the name of democracy.

(Photo is a Syrian man in the rubble of a building following bombing by Russian or Syrian warplanes in Aleppo on July 19, 2016. From AFP)