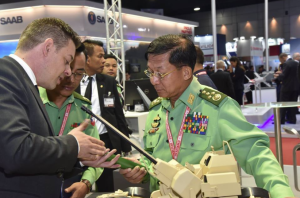 Remember those military sanctions imposed on Burma by the European Union, US, & Canada because of human rights crimes? The sanctions with loopholes big enough to move military aid through under the guise of humanitarian aid & human rights training to the Burmese military? Well what we have here is an illustration of those loopholes. On the right is Burma’s Senior General Min Aung Hlaing, architect of the Rohingya genocide, visiting the Defense & Security 2017 Exposition for ASEAN countries held last week under the aegis of Thailand’s military junta.

One would think the military sanctions would prevent Burma’s Genocidaire-in-Chief & his entourage of military officials from attending a trade show to inspect the latest in high-tech warfare. But as we well know from the arming of ISIS & other rightwing paramilitary death squads operating in Syria (& elsewhere), billions of dollars of arms industry transactions are black market operations. So if Burma wants to get its hands on any of the new equipment, it only has to make a list & hand it to one of its operatives–possibly one of those associated with the CIA or Mossad–or to its Chinese, Russian, or Israeli arms dealers.

According to the Thai organizers of Defense & Security 2017, there were 300 official military delegations from over 40 countries & attendees from 60 countries inspecting the arsenals displayed by over 400 defense & security manufacturers from 50 countries including the US, UK, twelve European nations, Canada, Israel, India, South Africa, Australia, China, Japan, Jordan, Pakistan, Lebanon.
So much for those military sanctions imposed on Burma for genocide. Justice for the Rohingya people rests with mobilizing human rights supporters around the world demanding our governments enforce sanctions & close the loopholes large enough to move armored tanks through.