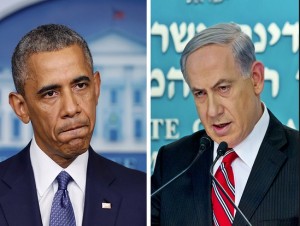 So the bromance is over between Obama & Netanpsycho. And we’re supposed to think the earth moved? It’s probably more than theater but it doesn’t mean squat! All the media is chiming in on this with some speculating the estrangement is from personalities, some say philosophies, some even surprise us by bringing in politics like Iran. They list awkward moments between the two & even analyze body language. Why don’t they just read the White House press releases? Like the one just released titled “Five Things You Need to Know About the US-Israel Relationship Under President Obama” where Obama boasts of his love & all the things he’s done for an ungrateful Netanpsycho. These are just the highlights of a love letter disguised as an itemized bill of goods delivered to Israel:

(1) Israel is the leading recipient of US foreign military money receiving over $20.5 billion under Obama. Of that amount, $225 million went directly to Operation Ethnic Cleansing in Gaza last summer.

(2) The US under Obama has staunchly defended Israel’s legitimacy internationally including voting no on numerous UN resolutions sanctioning or criticizing Israel.

(3) Israel & the US have a multi-billion dollar economic relationship including a free trade agreement & extensive US investments in Israel’s high tech industries. Under Obama the economic entanglements have substantially increased.

Before we get to the final love gesture from Obama to Netanpsycho we should keep in mind that school free lunch programs are being cut in the US; food stamps & medical care for poor families are being slashed; & massive cuts are administratively implemented in Medicare & Social Security.

(4) Under Obama’s regime just in the past six years, the US has donated $140 million to transport Zionist immigrants to Israel. The money is used for transportation, transitional housing when they arrive, & Hebrew language programs. So while the US puts on a dog & pony show of opposing new Israeli settlements they are in fact bankrolling Israel’s settlement program in the West Bank. While our little kids are starving & unable to get necessary medical care & our old people are unable to pay rent & eat too, our tax money is going to teach settlers from Des Moines how to speak Hebrew where the native tongue is Arabic!

Does that all sound like estrangement to you? Netanpsycho probably has the personality of a rattle snake (with all due apologies to the rattler) & his soul is more like worn-out shoe leather so it’s no wonder the bromance has hit the skids. But we’re talking two war criminals in it together & both a threat to human civilization. And though the love may have ended, they’re still in bed together.

(Photo of the jamokes with their mad face from Reuters)