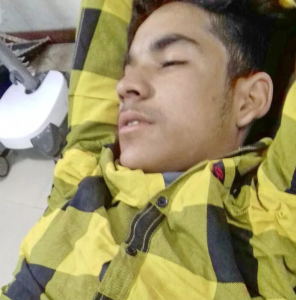 There is an update on the condition of 16-year-old Zahid Ahmad who was hit by pellets at close range as he walked home from taking an exam last Friday. He was not engaged in stone pelting, though if he were that would not justify the use of pellet munitions. Doctors at the hospital which treated him report that after a four-hour surgery, they had to remove a kidney, his gall bladder, & appendix because they were so damaged by pellets. He remains in critical condition & under constant observation by a team of doctors.

Zahid’s father Manzoor Ahmad who is a pashmina weaver said his son worked as a part-time carpenter to contribute to his education & to his family. Beside Zahid recovering from the trauma of being assaulted so violently, being disabled will put an economic strain on the family since there is no social security under Indian occupation. They cannot file criminal charges against the soldiers since occupying authorities claim Zahid was involved in stone pelting & got ‘injured during retaliation.’