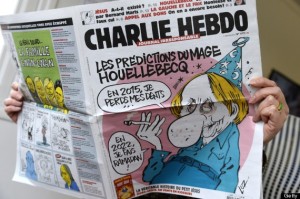 The attack by gunmen on the Paris offices of Charlie Hebdo was barbaric. Twelve people were mowed down with assault weapons in cold blood. Charlie Hebdo is a satirical & iconoclastic weekly newspaper that gained notoriety from mockery & insults to Islam. If you haven’t read the paper it’s not possible to assess if it pandered to Islamophobia in the French political climate where Muslims are under attack. But even if it expressed fanatical Islamophobia, freedom of speech is an achievement of the French Revolution that ended feudal rule & introduced popular democracy. If it is abridged in an ill-conceived attempt to defend Islam, it will be abridged most of all for those who oppose Islamophobia– because Islamophobia is the guiding ethos of neoliberal politics & military policy today.

The paper was prosecuted & acquitted in 2007 for inciting social hatred against Muslims & firebombed in 2011. It’s editor, killed in the attack, was under police protection from numerous death threats. They paid a heavy price for freedom of speech.

Police & witness reports conflict. Witnesses report two gunmen; the police report three. Two got away in a car & no one knows where the third disappeared to. They don’t know much about this crime at all. Most of all they don’t know who committed it. But of course the assumption is that it was Muslims–as if Islamic theology dictates a resort to mass murder when offended.

It may turn out to be a couple Muslim guys but their religion is not what is salient so much as their commitment to violence as a political method. Whoever they are, they should be hunted down & prosecuted in a court of law.

The tsunami of condolences & outrage pouring in from murderous regimes–the very regimes using Islamophobia to conduct barbarous wars–mocks freedom of speech & most of all is contemptible mendacity.

Those regimes will use this incident to whip up suspicion & hatred of Muslims & we’ll likely endure another round of alarmism about ‘creeping Sharia law’ & ISIS infiltrators coming across the border. Freedom of religion is another achievement of the French Revolution.

(Photo is cover of Charlie Hebdo from AFP)