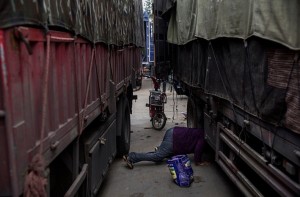 The UN just issued its annual world hunger report titled “The State of Food Insecurity in the World 2015” (SOFI 2015). The report claims the number of starving people in the world dropped to just under 800 million—216 million fewer than reported in 1990-92. They posit that this means fewer people in the world are hungry. How do they know more people aren’t just dropping dead from starvation?

The UN report has a giant methodology problem, even though it elaborates the most up-to-date statistical approach, because their data relies on official statistics reported from each country. Hilaire Belloc once said “statistics are the triumph of the quantitative method.” Indeed they are often more likely to be the triumph of the obscurantist method, negating political methods of analysis.

The report is replete with euphemisms, beginning with the term “food insecurity” & continuing with the distinction between “developed” & “developing” nations. Since each country reports for itself, is there a uniform definition of what constitutes “food insecurity”? Is there an agreed income standard? Does it mean you’re hungry most of the time & don’t eat every day? Or does it mean you & your kids are starving to death? At what US dollar level do you stop being food insecure: $2.00 a day, $2.50 a day, $4.00 a day? Because in most places that won’t get you a junior burger at McDonald’s.

Are they required to count those in refugee camps & undocumented immigrants? Or does no country have to claim them? What about the millions immigrating around the world? Which country claims them? And what about people like the Rohingya, denied citizenship in Myanmar & considered stateless? Are they counted in Myanmar, or in Bangladesh refugee camps where they live on stingy UN aid, or in Indonesian refugee camps—or still adrift in the Andaman Sea, starving to death? The SOFI 2015 report claimed Myanmar went from 27 million hungry in 1992 to 8 million in 2015. That’s nearly miraculous & they need to share their secrets for eliminating starvation with the rest of the world—though ethnic cleansing isn’t something every country will want to employ.

As for that distinction between developed & developing nations, it should be rejected with contempt as a colonial distinction signifying white supremacy. Neoliberal capitalism has no intention of allowing countries to develop while multinationals strip them of their natural resources.

The report doesn’t itemize country by country for “developed” countries, as it does for the “developing” countries. An interesting omission since we can’t see how much starvation there is in any European or North American country. Instead it tells us there are just less than 15 million starving people in the “developed” countries. How do they account for the contradictory estimates in 2013 from hunger NGOs that over 49 million Americans live in “food insecure” households, including 16 million children & 5 million seniors? It’s the end of the school term coming up now & without free school lunch programs, thousands of children (mostly Black & Latino) will be scouring dumpsters & food kitchens begging for food.

There are other notable problems in estimates from some of the “developing” countries—all of which highlight the methodology problems of letting countries do their own accounting. China reported a reduction from 289 million hungry in 1992 to 133 million in 2015. Now that beats even the miracle of Myanmar. In fact, it’s almost unbelievable. Especially when you read that the chief economist of the Asian Development Bank says the number of Chinese living under the poverty line of US $1.25 a day is more than 400 million people, or 30% of the population. Added to the confusion are the Chinese writers—call them friends of the regime—who claim in prestigious journals that “Hunger as a social problem has largely disappeared after being prevalent in China for several thousand years with the rise & decline of dynasties” (Jianhua Zhang in Oxford Journal of Experimental Botany). It’s a toss-up between the apologist & the regime over who’s more ridiculous.

The report says the greatest concentration of hunger in the world is in Southern Asia with about 281 million starving people. Accordingly, India reported 210 million starving in 1992, now down to 194 million. Curious, because the World Bank in 2011 reported about 276 million Indians lived below $1.25 a day. So is the discrepancy between the World Bank & Indian officials because you can eat real well on $1.25 a day in India? Or at least not starve to death? Or are we looking at another statistical miracle?

Africa is the second region with the most world starvation with at least 220 million hungry in 2015, showing an increase of 44 million since 1992. That would more than explain the tsunami of immigration to Europe. Gambia, where immigrants are fleeing by the thousands, reports no change between 1992 & 2015 in their 0.1 million hungry people out of its population of 2 million. Somebody needs to explain how that’s possible in a country where nearly 50% live under the poverty line. Nigeria reported 13 million hungry people out of a population just under 179 million–but again that’s at odds with the estimate that 70 percent live below the poverty line. Again, can somebody explain the discrepancy?

The UN needs to coordinate better between its different agencies. UN-Habitat claimed last year that 863 million people in the world live in slum conditions, an increase of 210 million since 1990. That would suggest world hunger is increasing. That would explain predictions that by 2030, 2 billion people will live in slums, primarily in Africa & Asia, lacking access to clean water, working toilets, employment, & food.

That would also suggest most of the SOFI 2015 report is statistical baloney. But even if it doesn’t rise above the level of baloney 800 million hungry people is massive. That is nearly three times the size of the entire US population.

The picture is a senior in China scrounging for vegetables that may have fallen off a delivery truck. Dumpster diving, food kitchens, scrounging: none of this will improve under neoliberalism, the barbaric phase of capitalism. Humanity has some hard choices to make.