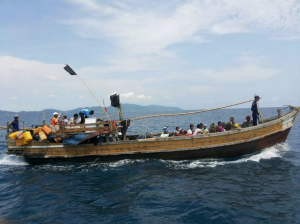 There’s a report originated from Associated Press (AP) that a damaged boat with 56 Rohingya refugees, believed to have set sail from Arakan/Rakhine State within the past three weeks, stopped at an island in southern Thailand on Saturday evening to get out of a storm at sea. The AP report said those 56 people “claiming to be Muslim Rohingya refugees” from Burma were helped back to sea by Thai fishermen & navy craft.” The Thai police claim they restocked essential supplies before putting them back out to sea.

Everything about this story stinks like horse manure, including the suggestion that refugees would claim to be Rohingya when they could have been aliens from outer space. Why the hell would they lie? Couldn’t Thai officials tell who they were from their language? There are reports that the storm had not abated before the boat was put back out to sea. There are no reports that the boat damage was repaired before it was forced back out to sea. We’d like to see an inventory of what the Thai police considered “essential supplies.” Were food & water included? We’d like to know if the Rohingya refugees wanted to move on in a rickety, damaged boat during a storm with at least 20 kids aboard? Or were they forced back to sea, as is the practice of the Thai Navy?

Take a look at this photo which the Thai Navy released claiming it was the Rohingya boat being escorted out to sea with a Thai naval officer seen standing in dark outfit on the bow. There are only about twenty, not 56, people in that boat in a calm sea. The Thai Navy has no idea what happened to that boat & in violation of maritime law almost certainly forced that boat to set sail in treacherous conditions against their wills. There will come a time of justice for the Rohingya people & part of it will include bringing down the Thai military regime that commands such barbarity against refugees from genocide.