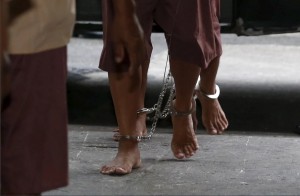 Ninety-two accused human traffickers, including several high-ranking military officials & an army general, several policemen, a mayor & local politicians, went on trial in Bangkok, Thailand yesterday. The suspects were arrested after the discovery last year of 36 mass graves in the Thai jungle bordering Malaysia. The bodies are believed to be mostly Rohingya Muslims fleeing persecution & ethnic cleansing by the military junta in Myanmar, as well as Bangladeshi immigrants.

This is what you call a show trial, a kangaroo court. The military junta ruling Thailand since a coup in 2014, has no claims to higher ground when it comes to the human trafficking industry. Although the defendants are likely guilty as charged & on all counts, this criminal prosecution is intended to scapegoat & take international attention away from the junta’s culpability.

There can be little doubt the generals & policemen involved acted with the full knowledge of the military regime which was trying to keep refugees & immigrants out, exploited refugees through extortion, & is criminally culpable for their monstrous deaths. Human rights groups have long accused Thai authorities of collusion in trafficking though the charges are ritually denied. But who can ever forget when in May of last year, the junta refused entry to thousands of Rohingya & Bangladeshis stranded in drifting boats without food & water in the Andaman Sea? We still have no accounting for thousands of them–& we consider them our brothers & sisters so our outrage will not soon dissipate & they will not be forgotten. And who can pretend we don’t know the regime fosters the sex tourist industry brutalizing thousands of children in Thailand?

There isn’t an iota of sympathy for those defendants caught in the snare of their own criminality but this trial in intended only to take the heat off the military junta & not to bring justice to those Rohingya & Bangladeshi who so brutally suffered at their behest.

Photo is trafficker defendants being led into criminal court in Bangkok.