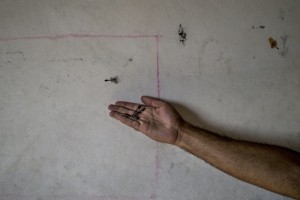 This Palestinian man from the Bureij refugee camp in Gaza is holding & pointing to flechette darts in his bombed-out home. Flechette shells are anti-personnel weapons fired from tanks which explode in air & release thousands of metal darts. Remarkably, they are not prohibited under international humanitarian law. Maybe if they shoot a few up Ban Ki-moon’s ass the UN will change its mind. In 2002 the Israeli Supreme Court upheld their legality for military use by the IDF–a done deal, if there ever was one. An unidentified Israeli military source said they were only used against “legitimate military targets in accordance with international law” but didn’t specify that “legitimate targets” included small children & anybody within shooting distance of those tanks.

They’ve been around a long while since they were invented by deranged but well-remunerated scientists in the US. Israel used them in Lebanon & in Gaza in it’s 2008-2009 phase of Operation Ethnic Cleansing. The pieties of international law have never stopped Israel from deploying illegal weapons. In the 2008-2009 assault they used artillery shells containing white phosporous which caused many agonizing deaths & massive burn injuries.

Things are really breaking down on the propaganda front for Israel. So while a few days ago, The Washington Post was calling for the complete destruction of Gaza, now they’re bringing on a liberal Zionist rabbi calling for “radical empathy” on both sides. She doesn’t like the vitriolic language or strident voices that “ignore or deny the painful narrative of the other.”

Just dripping in empathy she says we need to hear “pro-Palestinian voices that empathize with the Israelis racing for shelter, that denounce terrorism & rocket attacks, & that refuse to tolerate any anti-Semitic tropes masquerading as criticism of Israeli policy.” And, she goes on, “We need to hear pro-Israel voices expressing authentic grief at the deaths of Palestinian children, calling for protection for civilian populations, acknowledging the damage inflicted by 47 years of occupation, and denouncing any language that dehumanizes Palestinians or Muslims.” Well isn’t she the very soul of graciousness.

We share her concern at the rise of anti-Semitic violence around the world but why does she try to vilify Palestinian supporters as the perpetrators? She claims protesters against the slaughter in Gaza held up signs saying “Hitler was right” & encouraging reading of the “Protocols of the Elders of Zion.” Golly, we’d sure like to see some documentation of that accusation & we wonder how in the hell she spotted those signs in the sea of placards demanding Israel stop the massacre in Gaza. But we’re still waiting for documentation of property damage in Israel from those Hamas rocket attacks.

In her homilietic she says radical empathy will “force us to see the humanity of the other, to reject hate speech & violence, & ultimately to demand a political solution that protects the human rights of Palestinians & Israelis.” But why is her sermon addressed mainly to Palestinian supporters? We’re not the ones sitting in the hills of Sderot cheering on ethnic cleansing? We’re not supporting a government & military engaged in ethnic cleansing. We’re on the record as publicly opposing it.

Behind the smarmy mask of empathy & noblesse oblige is the–at this point in time–hopelessly stupid proposal for a bantustate solution. Behind the smarm is the refusal to face the moral, political, & criminal bankruptcy of Zionism & a shameful attempt to portray Palestinians defending themselves with homemade rockets as morally equivalent to one of the mightiest military apparatuses on the planet.

It is not those who stand with Gaza against ethnic cleansing who need sermons on empathy. Nice try rabbi, but your smarmy homiletics & unsubstantiated accusations don’t cut it. You need to direct your sermons to Israel & your condemnations too. And by the way, if Palestinians use epithets against those psychos in the Knesset & the hills of Sderot cheering on the murder of their children, well, “bombs & mortars will break your bones; words will never hurt you.” So shove your smarm & your phony homiletics.