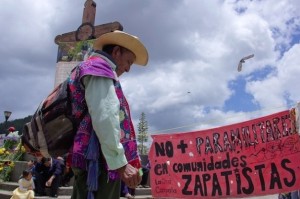 The relationships between the US & other countries in the Americas are fraught with contradiction & complexity. All of them were colonized by Europeans but different regimes employed different strategies with the Indigenous peoples, all of the strategies barbaric. In the US, they were driven on to barren reservations; in most of the Americas, they were stripped of their lands by European colonizers & reduced to debt peonage. Genocide was the singular commonality.

As capitalism developed in the western hemisphere & as US militarism & colonialism dwarfed all others, many countries in the Americas became client states to US economic & military interests with a corrupt elite in collusion with US oligarchs. As we know from the many US interventions over the past 100 years, they are not colonies but they are not free either.

On the losing end of all this have been Indigenous peoples who have made land tenure the pivotal issue at every stage of their historic struggle to survive against colonialism & the encroachments of capitalism. Mexico’s history cannot be told without considerable focus on the land question. It was a central issue of the Mexican Revolution (1910-1920) under the leadership of Emiliano Zapata who demanded redistribution of agricultural land & formation of ejido (communal lands) for peasant farming. Some land reform came out of that revolution but the changes were provisional so they could be reversed at an opportune political time.

That opportune time presented itself when neoliberal agriculture financed by the IMF & World Bank was introduced into Mexico in the 1980s along with NAFTA in 1994. This required dismantling the ejido lands & converting to commercial plantations for export crops. The Mexican government facilitated this plunder (which politicians stood to make a bundle on) by modifying the constitution & favoring multinational agribusiness with tax credits, reduced trade barriers, & other shyster tricks. These policies devastated subsistence farming, as they were intended to do, impacting mostly on Indigenous farmers.

This is a lucrative scam they’ve got going. Now Mexico produces food primarily for export & imports food, mostly from the US. Hundreds of thousands of farmers & farm workers were dispossessed, impoverished, & forced to immigrate to the US while agribusiness is making out like a bandit.

This is part of the context for the development of the Zapatista movement in the Mexican state of Chiapas which has one of the largest Indigenous populations in the country. The Zapatistas emerged in 1994 in opposition to NAFTA & to neoliberal plunder. It is one of the most important & organized Indigenous movements in the world & has volumes to teach about how to & how not to organize a popular movement.

The Zapatista movement has always been under siege, even though early on they abandoned guerrilla warfare as a strategy. The Mexican government now employs paramilitary units rather than outright occupation. In a May 2nd paramilitary attack on the village of La Realidad in Chiapas, a school & clinic were destroyed & a Zapatista school teacher named José Luis Solís López (known as Galeano) was brutally murdered by machete & gun.

The Zapatista movement is calling for solidarity from around the world. There have been rallies in places like NYC, Limerick, Ireland, & elsewhere. This petition is one of the easiest ways to render solidarity with this historic struggle against the depredations of neoliberalism which is decimating farming communities & displacing Indigenous peoples around the world. Please take a moment to read it & sign it, knowing you are playing a small part in one of the most important political struggles for justice today: http://www.anattackonusall.org/sign-the-call/

Photo is people gathered in the Plaza of Resistance in San Cristóbal de Las Casas, Chiapas, Mexico, to show solidarity with the Zapatistas after the assassination of Galeano