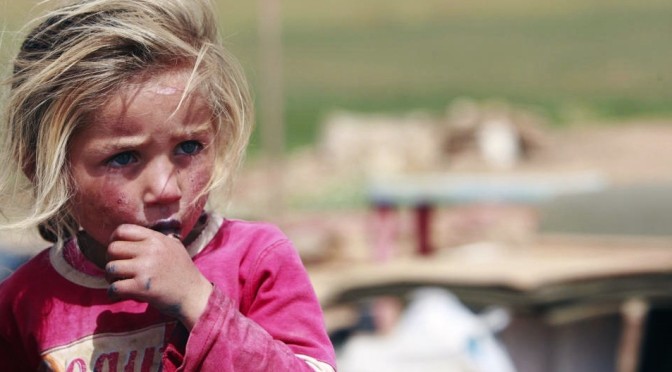 There is a genre of portraiture from the late 19th-early 20th century US of Native Americans. The works were mostly commissioned by capitalists like J.P. Morgan to fill the natural history museums they were building at that time as anthropological archives for “primitive” peoples. This was the post-Civil War era of ferocious US Army campaigns against native tribes west of the Mississippi River which exterminated thousands & routed survivors onto reservations. The photos are magnificent but glorified images of vanguished peoples & were intended to be anthropological records of peoples going extinct.

The violent realities of that transition for Native Americans was much uglier than those portraits show; in fact, the photos are very much a form of propaganda & were intended to be. The real faces of people dispossessed of their entire way of life & railroaded by armed militias onto barren lands must have been very much like the face of this small Palestinian Bedouin child who watches as the Israeli army demolishes the tents & sheds of the Bedouin town of Tubas in the West Bank (Apr 1st 2014).

Last year, Israel proposed the Prawer Plan, a barbaric scheme to uproot an estimated 30,000 to 70,000 Palestinian Bedouins from their historic homes in the West Bank to make room for Israeli military bases, Zionist settlements, & to accelerate the ethnic cleansing of Palestinians. Not just by the unenforceable terms of international law, but by the terms of the Oslo Accords, Israel has absolutely no right as an occupying army to evict or relocate a single Palestinian in the West Bank. But Israel believes its Zionist project puts it above the law.

After repeated protests by Palestinians & Israeli human rights groups (& a few peeps of protest from the UN), Israel formally abandoned the Prawer Plan in December 2013. But it has not abandoned the policy & the Israeli army continues to rout thousands of Bedouins from their villages & demolish their homes. It claims they will be relocated to modern facilities. They of course will actually be getting the squalid equivalent of an Indian reservation. But it doesn’t matter if they were being moved to the Taj Mahal; Israel has no rights whatsoever to mess with the heritage, land rights, property, & culture of thousands of Palestinians.

Just as Israel has been schooled in treachery by the extermination of native peoples in the Americas, so too we must be schooled in opposing such treachery by the history of human solidarity against oppression. The increasing struggles of native peoples, not just in the Americas but around the world–including the Palestinians–have the potential to rout every last one of those colonial schemes & campaigns & archive them in a museum where such primitive things belong.