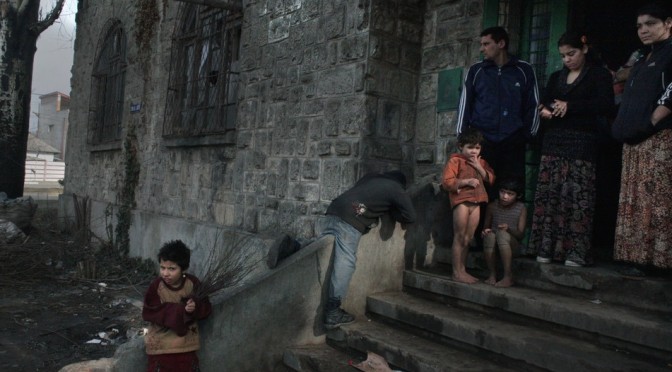 There is a distinct & alarming pattern emerging throughout Europe of extreme persecution of Roma. In one European country after another, including Bulgaria, Greece, Italy, France, England, Denmark, Spain, Romania, & Serbia, riot cops have been breaking up Roma caravan sites & settlements, forcibly evicting residents, & bulldozing homes many have occupied for decades. There has long been considerable discrimination against Romani in every sphere of life including housing, segregated education, denial of social services & health care, massive unemployment; they endure racist harassment (including by the cops), racially motivated crimes, & attitudes which consider them lazy, thieving, dirty freeloaders. But something new is emerging & it is directly related to neoliberal policies, particularly urban development projects bankrolled by European banks, & enforced by the European Union (EU) & IMF austerity programs. It is the same ruthless gentrification process as that displacing people in Manila, Rio de Janeiro, Dhaka, Mumbai, Los Angeles.

Roma often established settlements on public lands, making them formally illegal. But they have lived there for decades, often without sewage, plumbing, or electric power, & were never required by officials to regularize tenancy or the buildings they constructed. Neoliberalism is changing all that. In the last decade, municipalities began transferring title of the land to private investors for urban development projects which prioritize infrastructure projects over housing. The European Investment Bank (EIB) imposing the IMF austerity programs bankrolls multi-million dollar urban development projects like luxury malls & roads & bridges to facilitate plunder & when an EIB project comes up against a Roma community, they bulldoze it.

Roma political & rights groups denounce forcible evictions for violating human rights & international law, even calling them ethnic cleansing since thousands are made homeless, including elderly, infirm, disabled, & children. In a recent case of eviction in Eforie, Romania, Roma were offered temporary asylum in a filthy abandoned school house; in Serbia & Romania, they’ve been offered shipping containers as housing, as if they were nothing but dry goods & hardware. Mostly, they’re just bounced to the street.

Undocumented immigrants & Roma have long been used as political scapegoats, with racism the common denominator. Governments orchestrate injustice & blame it on those who own & control nothing. Under fascism, this led to the persecution & murder of one million Roma, six million Jews, & an unestimated number of people with disabilities, homosexuals, socialists, communists, liberals.

The persecution of Roma under the banner of urban development is a call to arms. The ass you save will be your own.

This is a photo of Roma in Eforie, Romania at the abandoned schoolhouse they occupied after the city recently bulldozed their settlement.