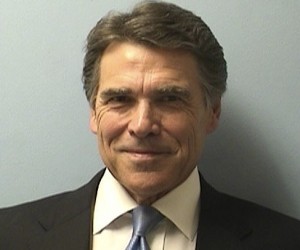 There are many prejudices about the state of Texas–especially that everybody here is a redneck, when it’s actually a very diverse place. It has many distinctions, especially for having produced America’s dumbest politicians. Governor Rick Perry holds special place in that regard. He’s a vicious bozo so his stupidity evokes no pity whatsoever. His latest gem is a stern warning that “the jihadist group of the Islamic State of Iraq & Syria (ISIS or ISIL) may have already sent militants across the US-Mexican border.” It wasn’t long ago he was saying the same thing about al-Qaeda.

It’s regrettable he’s not running for governor; he would be so much fun to campaign against & the Democratic candidate is a bore. A liar, but a bore.

Perry has just been indicted for abuse of powers which means he messed with the wrong Democrat. This is his mug shot when he was booked. Pardon me, but how many criminals actually smile for their mug shot?