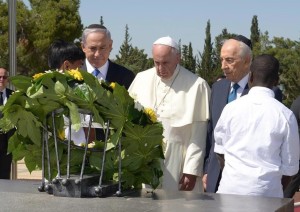 Since symbolic gestures now carry such political weight, what does it signify when Pope Francis lays a wreath on the grave of Theodor Herzl, the ideological founder of Zionism?

Herzl is one of the first ideologues of Zionism, an ideology which holds Jews superior, rejects assimilation, & promotes a Jewish-only state which defies all of the democratic achievements of the revolutions that defeated feudalism & installed capitalism–like the separation of church & state.

Some claim Zionism is a romantic ideology, ennobling Jews. In fact, it’s a rancid ideology denigrating Judaism & every other human being on the planet. So what exactly is the pope honoring here?

Herzl died in Austria but had his corpse moved to Israel for burial. When Palestinian justice is won & there is a democratic secular state where Jews & Arabs can live together as brothers & sisters, they can move his corpse right back to Austria where it belongs.