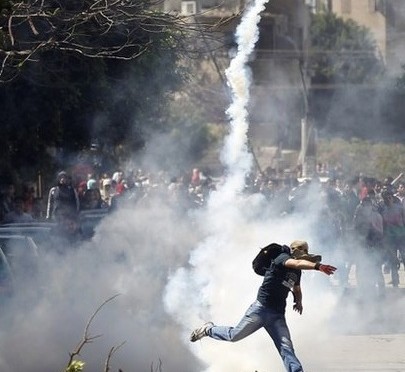 There are protests all over the world in opposition to neoliberal barbarisms but this guy in Cairo is certainly among the toughest & most intransigent in the world. He is identified in the media as a “supporter of the Muslim Brotherhood,” but media now identifies all Egyptian protestors with that designation. Perhaps the designation is to discredit protestors & associate them with the disastrous policies of the Mohammed Morsi regime which colluded with the Egyptian military, US Pentagon, & Israel.

But in a savvy program to thwart the Egyptian uprising, the military turned on the MB to blame that conservative organization for the crimes of the military. This treacherous program included the massacre of thousands of members of the MB last year; classifying the group as a terrorist organization; arrest & incarceration of thousands of members; & last week, an Egyptian kangaroo court sentencing 529 MB “supporters” to death. Fortunately, according to reports, only 123 of the defendants were present at the sentencing; the rest were either released, out on bail, or on the run. The mass death sentence came down the same day a group of journalists went on trial for allegedly being associated with the MB. Trusting the military as allies was a fatal mistake for the MB; you never trust a rattle snake not to bite.

The sole motive for the military going after the MB was to legitimize & gain popular support for repression. So whether we dislike what the MB stands for or disagree with their conduct during the Morsi regime, it is the duty of democracy activists around the world to stand with them against persecution by the military. Because you can be damn sure the regime is not just targeting MB members but also thousands of MB “supporters” who understand “an injury to one is an injury to all.” The Egyptian uprising is proving that slogan not to be just an empty slogan but the iron law of social revolution.

As in every mass social movement, the Egyptian uprising has ruptures & clashes in political perspective & ideology & divergent class interests. Because it was so massive & so monumental, we are learning what a complicated task social transformation really is. There’s no historic forgiveness for naiveté like trusting the military & no substitutions for forging unity with disparate political forces.

Our fullest solidarity & deepest respect for all those in Egypt defying tyranny.