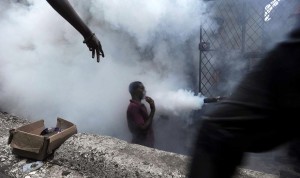 One look at this picture will explain the recent protests in Haiti denouncing president Michel Martelly, the sniveling protégé & accomplice of former dictator Jean-Claude “Baby Doc” Duvalier & the two Clintons in setting up Haiti as another sweatshop nation.

The man seen here is a resident of Petion Ville, a remote suburb of Port-au-Prince. Petion Ville is one of the richest areas in Haiti where all the diplomats, foreign businessmen (that’s the term for crooks & plunderers), & most of Haiti’s oligarchs live. It’s also a tourist haven with lots of chic bistros where you can see Duvalier dining with the likes of do-gooder & white savior, Sean Penn.

Petion Ville is mostly gated communities that are compared to Beverly Hills in LA where all the movie tycoons live, but with the treacherous addition of razor wire fencing. You’d think that wouldn’t be necessary in an enclave of such high-level thievery. The residents are neoliberal operatives & goon squads, not break & entry men. But shantytowns have emerged on the perimeters of Petion Ville, most likely by those displaced in the 2010 earthquake who still have no housing & who are hoping to find work in the swanky tourist clubs. The millions in relief donations had to be used instead to set up sweatshops & of course pay for the Clinton’s lavish indulgences.

In this photo, Haiti’s Ministry of Public Health is spraying chemicals to exterminate mosquitoes in one of the shantytowns. Well the caption doesn’t say it was one of the shantytowns but you certainly don’t think they would spray toxic chemicals on residents of a gated community, do you!? The health workers reported the procedure was to prevent diseases like chikungunya, dengue & malaria. If those diseases were just a threat to shantytown residents, no big deal. But those diplomats & robber barons have to be protected even if it means endangering the health of shantytown residents. Have you ever seen such stinking cynicism!?