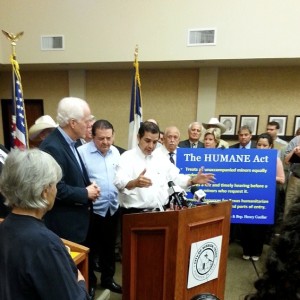 The Democratic & Republican politicians co-sponsoring a new bill in Congress to speed up the deportation of children held a press conference today in my town hall. The Democrat has been claiming children are enticed to come here by drug cartels. Driven by vengeance, I decided to attend to roast his ass & rally with other immigration rights activists.

They stopped me at the entrance & queried if I was from media. Never offer a con artist an alibi. I’d never have thought of that myself. Of course, I answered & I flashed my note pad to prove it. It helped that I have gray hair & could be mistaken for a Republcian.

Inside we got speeches in favor of the malignant legislation from a number of local mayors–one more boring & long-winded than the next. Reportedly, they don’t have heating systems in city hall because it’s just not necessary due to hot air. Those who brag we have a model democracy have never attended such an affair, unless by model they mean a living hell.

The official bipartisan line delivered is that these thousands of small children & teenagers flooding the border from Central America are associated with prostitution & drug cartels & they had a local sheriff vouch for this idiocy. When I arrived my blood was on simmer; after an hour of this tripe it was someplace over the boiling point.

Under my disguise as Republican reporter, I shot my hand in the air when the press conference convened; I wasn’t going anywhere with all that pent-up outrage. My question was simple: how does the deportation of thousands of little kids accord with international human rights law, with child welfare legislation & provisions in international law, & laws governing the human right to refuge & asylum? (Between you & me, I know those laws are only paper but I really know how to work ’em if I have to.) I also added it was unseemly & outrageous to make associations between small children, prostitution, & drugs as a justification for deporting them. I was interrupted once & asked if I was in the media; I answered “yes.” Well doesn’t www.maryscullyreports.com qualify me as media? Or do I have to talk stupid like Richard Engel covering Gaza for NBC?

There’s no need to report their non-answer since they’re both dopes & were probably stunned that one of the only white faces in the room who they relied on for xenophobia was in fact not a Republican but a radical troll.

I tolerated as much as my stomach could bear & then backed out of the room but not before stopping at the sheriff to tell him he shamed the human race. Then I went & joined the immigration rights picket outside. It was a better class of people.

Later, on the basis of my question, a local talk show host came over & corraled me for an interview which turned out to be a grilling by a libertarian. Nothing I love more than giving my opinion & he gave my blog several plugs. I got to defend immigrant rights, skewer the legislation, & announce my candidacy for Texas governor to 100,000 listeners. Not a bad take.

(Photo of me on the left listening to the two politicians blubber their way through an answer, by Ronnie Garza)