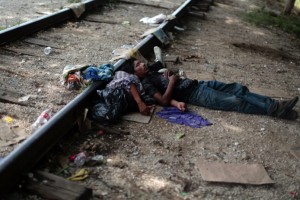 While manicured officials in the Obama regime utter pious sentiments about the “humanitarian crisis” on the US-Mexico border, they adjudicate the quickest way to deport tens of thousands of undocumented immigrants, including small children. They wouldn’t know humanitarian if it came up & hit them in their ugly mugs.

These two Guatemalan men sleeping on the train track in Arriaga, Chiapas (the first Mexican state on their journey north) show us the squalor & humiliation, not to mention terror, millions of people around the globe endure simply to find work.

These young guys have over a thousand miles yet to go riding on “La Bestia” or “the death train”, a freight train they ride north that doesn’t stop for them to board or dismount. Hundreds lose limbs in the process. Paramilitary & criminal gangs (if a distinction can be made) prey on immigrants, subjecting them to robbery, kidnapping, extortion, assault, rape, murder, disappearance.

Immigration is a central part of human history; it’s what makes humanity so beautiful & varied. If corporations can move their capital, sweatshops, & plundering operations wherever they want on this globe, working people have the right to go where they want. Immigration is a human right.

Open the damn borders! No human being is illegal! Solidarity & Godspeed to these young men. 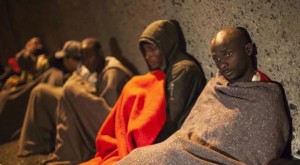 There’s a world of hope & dreams invested in these young men who were among a group of 22 immigrants from Africa, including two women & six children intercepted off the coast of Spain near the Canary Island of Gran Canaria. Half are sub-Saharan Africans, half are from the Maghreb region of northern Africa.

Their overcrowded boat described as “makeshift” ran adrift after it lost engine power & had to be rescued by the Spanish coast guard. “Rescued” of course is a qualified term for undocumented immigrants. They didn’t drown in the Meditarranean Sea like so many thousands of fellow immigrants but they will be incarcerated, processed, & most will be deported & dumped back somewhere on the African continent.

You can see how elated they are to be “rescued” because many have entire families dependent on their getting into Europe to find work & send money home; many are refugees fleeing war; many have been dispossessed by neoliberal plunder. All of them are desperate or they wouldn’t risk their lives in a makeshift boat that could prove their doom.

Working people around the world are inundated with agitation against immigrants, as if they’ve come to take our jobs or go on the dole. That’s a classic divide & conquer device that plays well among those fearful for their jobs, especially when it’s orchestrated with racism. So one of the most promising political developments in several countries is that immigrants are standing up for their rights fearlessly. Our heartfelt solidarity with their struggles.

Immigration is a human right! Open the borders! Tear down Fortress Europe!