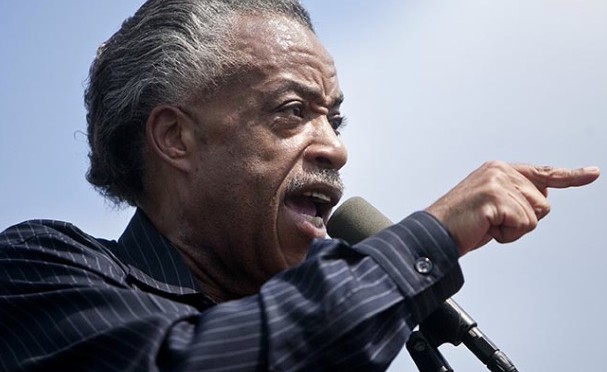 Irish Central.com, the sister website of two Irish-American newspapers, bills itself as the website for the “global Irish diaspora,” whatever the hell that is. It’s been a long time since Tipperarry for most of us but now we can claim to be part of a diaspora. I feel like a refugee already & my family has been around these parts for 100 years. Wait till the German side of my family catches on to all this; we’ll be laying claims to Westphalia.

Sometimes the site has useful news; other times it’s making foolish boasts about Obama’s Irish roots as the great-great-great grandson of a carpenter from County Offaly or B. Clinton’s Irish heritage as the great grandson of immigrants from County Fermanagh. One of their newspapers actually named Clinton Irish American of the Year in 1996 & inducted him into the Irish America Hall of Fame in 2011. Are they that desperate for heroes or do they just like sucking up to power?

Today they’re reporting about the scandals surrounding Al Sharpton. They’re aghast & simply nonplussed that such an unsavory fellow with a long rap sheet of fraudulent misconduct, including mob connections & being an FBI informant, would have his own MSNBC show. Worse than that, his virtues are extolled publicly by both NYC mayor de Blasio & Obama.

This isn’t the first time Irish Central has displayed a credulity indistinguishable from idiocy. They broke the hard news in 2009 that billionaires Bill Gates, Warren Buffett, David Rockefeller Jr., George Soros, & several others were meeting secretly. Have they ever known them to scheme publicly? In the same year, they reported rock star Bono snubbed George Bush by dodging a hug from him. Bono wasn’t snubbing Bush, for heaven’s sake; he was trying to get to his ass so he could kiss it. Irish Central has got to get its stories straight.

The successes of Al Sharpton are no mystery at all if you pull your nose out of a phony Irish history of leprechauns & green beer & look US politics straight in the eyes. Sharpton is from the same political tradition as Clinton & Obama–& that aint Irish! It’s called hucksterism & shysterism.

(Photo of Sharpton from Irish Central.com)