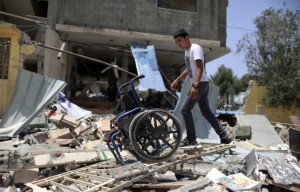 Netanyahu (who we will refrain from describing with adjectives since the only suitable ones are epithets) is vowing to ignore international pressure & take out every rocket launcher & sniper’s nest in Gaza: “We will continue to forcefully attack anyone who is trying to hurt us,” he said. “No terrorist target in Gaza is immune.” So that explains why he hit the outdoor cafe, the mosque, the hospital, a rehab center for the disabled, & a charitable association for the disabled, bombed them into smithereens, & killed some of the residents & nurses. As hasbara & the Alibi Ikes of media would portray it, those disability centers were harboring Hamas rocketeers & had to be taken out.

But exactly what international pressure is Netan-psycho-yahu referring to? Since there isn’t any public opposition from a single government on planet Earth, he can only be referring to the thunderous international protests around the world demanding an end to the massacre in Gaza. For those who question if protests matter, Netan-psycho-yahu reminds us of Richard Nixon who used to claim he didn’t notice millions of anti-Vietnam War protesters marching in front of the White House because he was watching a football game. At all times, they measure how far they can go by the strength of public opposition which they pretend doesn’t exist.

These international protests do matter & right now are the only thing that can stay the hand of Israeli genocide. Last night, Israeli marines sitting in tanks on the Gaza border initiated the first ground incursion into Gaza. According to the official lies, they exchanged gunfire with “Hamas gunmen” & attacked a site used to launch long-range rockets. Was that site one of the disability centers? Or was it the mosque?

This photo is a young boy salvaging a wheelchair from the rehab center, which according to the caption “police said was struck by an Israeli tank shell.” Who the hell else would take out a rehab center? Evil fairies? Or the same space aliens who built the pyramids?