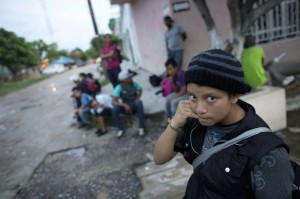 Volumes have been written detailing US economic & military plunder in Central America going back nearly a hundred years. Country by country, atrocities mount to a catalog of indictments for human rights & war crimes–not to mention those lousy sweatshops.

But let the fate of this 14-year-old Guatemalan girl testify to the unspeakable criminality of the US government–including the Barack Obama regime. After rafting the river from Guatemala into Mexico, she is here waiting to hop a freight train in Arriaga, Chiapas to take her north to the US border. The network of freight trains are called “la bestia” (the beast) or “el tren de la muerte” (the death train) because they are a traveling crime scene where thousands are killed, robbed, raped, murdered, kidnapped, assaulted by paramilitary squads. But they are the only means north even though the Mexican legislature voted to legalize Central American immigrants traveling through to the US. In fact, in violation of Mexican law, federal officers board passenger buses going north on highways to evict any immigrants.

Immigrants have to change trains several times on the route north & in the process of hopping on & off moving trains, many lose limbs. Without social services or medical care in their own countries, they are left on their own & unable to work, when they were often the sole providers for families.

While well-heeled, ugly-assed racists in Murietta, California are taunting undocumented immigrants, poor Mexicans who live along the train route rush with every passing train to offer food, clothing, & encouragement. This small girl however, remains completely vulnerable in ways too horrible to imagine.

Who do we hold accountable for this? Where do we direct our protests if not to the US government & the Barack Obama regime? Their policies in Central America necessitate this tsunamic diaspora & they’re the ones bullying & threatening children with deportation. Child welfare does not recognize national boundaries or citizenship but only the humanity & vulnerability of the child. When neoliberalism, the barbaric phase of capitalism, cannot even honor that, it proves its utter bankruptcy & it’s long-since time to write its epitaph.