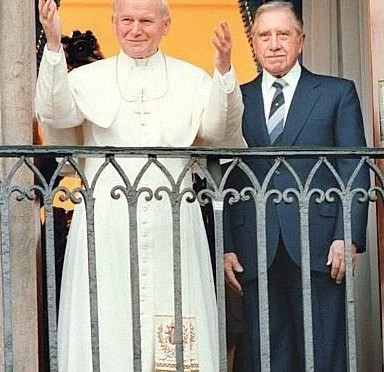 Pope Francis just gave right-wingers their very own patron saint in heaven when he canonized deceased pope John Paul II. Now when they justify their barbarisms by appealing to God, they mean business. What’s inexplicable is why the Vatican chose to canonize John XXIII (the pope who introduced Aggiornamento & the spirit of change within the church), along with John Paul II, who reversed Aggiornamento & hung out with dictators like Pinochet, the Chilean general who completely merits the epithet of “butcher”.

John Paul’s encounters with Pinochet weren’t episodic or accidental diplomatic events. He visited him in Chile & intervened with the British government to release Pinochet when he was briefly detained there in 1998. In their appeal on behalf of Pinochet, the Vatican, under John Paul II, called for “national reconciliation everywhere, including Chile”. This is the language of diplomacy & collusion to let the mass murder, disappearances, & torture of hundreds of thousands go unpunished.

Before John Paul visited Chile in 1987, then under Pinochet’s reign of terror, he called the regime “dictatorial”, which the New York Times called “unusually strong language.” We’ve seen referees at ball games denounced in harsher language. At the same time he called for journalists & democracy activists to pray for the restoration of democracy & for free elections but there is no recorded papal objection to the reign of terror.

Of course, Pope Francis, touted as the people’s pope, has unanswered questions about his own role under the Argentine dictatorship. In fact, there are a number of popes (some who were canonized) who should be held to historical account for their collusion with tyranny. Getting the papal scepter or a halo on your head does not exempt you from the demands of justice. There is no reconciliation without the full accounting that justice demands.

It is without question the majority of Catholics around the world do not agree with the Vatican associating with dictators. We need to take off our rose-colored glasses when reading media accounts about Pope Francis & start judging him by who he hangs out with & who he chooses to canonize.

The is photo of John Paul II & Pinochet in Chile.