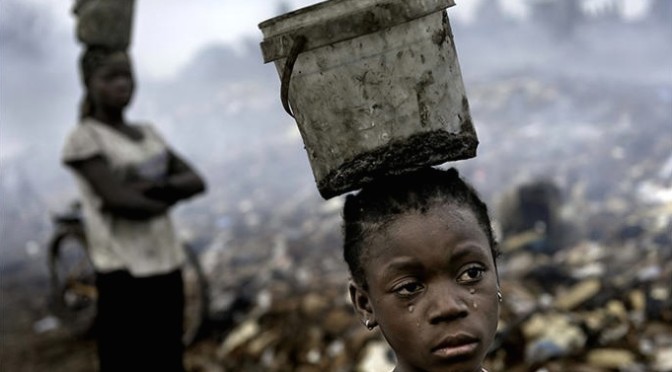 There are many things that damn capitalism & you don’t have to read Marx to know what they are. This little girl’s life says it all. Eight-year-old Fati moved with her mother Rahinatu from northern Ghana to Agbogloshie, the slum outside Accra, so Fati could work in the e-waste dump & Rahinatu as a porter. Rahinatu had to leave behind three boys when she fled an abusive husband.

Little Fati uses a magnet to sift through mounds of old electronics–most of it illegally dumped by other countries. She wears no protective equipment since her mother wasn’t informed of the toxicity of metals in monitors & chip boards. She’s an unhappy little girl because she wants go to school but between her & her mom they don’t earn enough money to eat every day. She also has a headache from untreated Malaria & a harsh cough from inhaling the smoke billowing off the dump site.

While Fati’s life energy is being corroded in that dump, environmental groups are negotiating with the Accra city council & Ghana government for laws dealing with the environmental impact of the e-waste while taking into consideration that people’s livelihoods are involved. And that’s a dilemma that only makes sense to those without an ounce of political vision. When millions of people around the world are forced to make bare subsistence off the toxic detritus of a system based on waste, it’s long-past the time of monkeying around with legislation to make things a little better & time to start working on systemic change. The environmental groups have found the government to be quite slow in their legislative deliberations. But isn’t that always the case when profiteering conflicts with human health & well-being? The stalling & deliberations can go on for years & if they do come up with model laws there’ll be no money allocated to enforce them. That is one of the oldest ruses in the book.

Some discussions of the Agbogloshie dump & of Ghana’s economic problems point to an economic division between the northern & southern regions of Ghana since many of the young people working the dump site immigrated from the north to find work. The commentators don’t understand why capitalist economists consider Ghana one of the fastest growing economies in Africa due to new oil production & increasing foreign “investment” when there is such gruelling poverty. Some commentators looked to the US economist Jeffrey Sachs for an explanation. Sachs is the guy who advised the former Soviet Union & several Eastern European governments how to transition from the mess they called communism to the disaster of capitalism. The travesty of his work speaks for itself. What he dismantled were the basic guaranteed social services like health care & housing & replaced them with massive homelessness, impoverishment, & gangster capitalism.

Untroubled by the carnage in his wake, Sachs stalks the globe advising regimes in Latin America & Africa, marauding like the Godzilla of neoliberalism. (Just hope he doesn’t come to your continent soon.) He’s had some born-again moments & has written books like “The End of Poverty” & “The Price of Civilization”. He even lobbied to become head of the World Bank so he could turn it into an anti-poverty agency. He’s of the same political genre as Bono & Angelina Jolie, only even more stupid & cynical. Despite witnessing overwhelming evidence to the contrary, he really believes capitalism works–& this explains the banalities of his writings.

He’s been advising in Africa for nearly 20 years & the pinnacle of his political thinking was summed up in “The End of Poverty” when he declared, “Africa’s governance is poor because Africa is poor.” Most of his political thinking is that primitive. For him, Africa’s development problems are rooted in geography & climate, due mainly to being landlocked & he quotes Adam Smith from 1776 to enforce his views. In Ghana, he sees the problem of the north-south divide as a matter of port accessibility but he thinks this can be overcome. He thinks he’s being profound here but he doesn’t address the legacy of colonialism, the depredations of neoliberalism, or IMF & World Bank austerity policies. He also doesn’t address Africa’s immense wealth in natural resources, or the military build-up in African countries by foreign armies. In short, Sachs is a fool. But a savvy fool, not to be trusted.

Ghana was a British colony & in 1957 became the first African country to declare independence under the leadership of Kwame Nkrumah. Nkrumah was inspired by the writings of Marcus Garvey, CLR James, W.E.B. Du Bois. (Du Bois actually moved to Ghana to collaborate with Nkrumah & is buried there.) Nkrumah had a strong influence on the Pan-Africanist & Black power movements in the US. He was involved in founding the Organization of African Unity (1963-2002) for collaboration among African countries to root out all forms of colonialism. That’s why, according to declassified CIA & National Security Council documents, the US (under the regime of Lyndon Johnson) engineered the 1966 overthrow of Kkrumah as president of Ghana.

If we want to know where social transformation in Ghana will come from, it will not be from the likes of Sachs, Bono, or Jolie. It will be from among the dispossessed & dislocated like little Fati who grow up with a belly full of injustice & hatred for capitalism. We should all hope to live long enough to see that glorious day.

(Photo by Renee C. Byer from “Living on a Dollar a Day: The Lives & Faces of the World’s Poor)