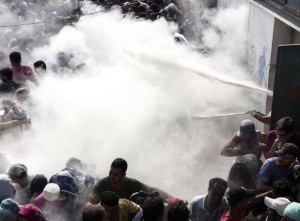 It was just a matter of time before the SYRIZA government in Greece cracked down on immigrants. When it came to power, it promised a humane immigration policy, a change from the barrier walls, detention centers, right-wing & police attacks. It functioned as the first line of defense for EU immigration policy & thousands were denied papers & unable to advance further into Europe.

After SYRIZA signed the devil’s bargain with the Troika & after it forged a new military alliance with Israel, the writing was on the wall for immigrant rights. Frontex, the EU immigration security system, had to enforce the barbarisms in Greece that they’re already using on the Morocco to Spain & Libya to Italy routes. The EU is doling out billions in euros to enforce its policies, not to ameliorate the suffering of thousands of refugees.

There’s no question that the influx of thousands of refugees creates logistical problems for Kos & other islands where they enter. There’s no question that if SYRIZA is bleeding pensioners dry to pump money into IMF & German banks, they’re unable to provide temporary housing, food, health care, transit papers to refugees. But how come they aren’t too broke to send in additional riot cops to manage refugees? That’s probably what those billions in EU euros to Greece are all about.

Now there are incidents of police abusing refugees, slapping & shoving them as they wait in lines that don’t move. Yesterday, police corralled a few thousand like cattle into a sports stadium for processing transit papers. Tired, thirsty, hungry, sweaty, frustrated people in close quarters is a prescription for problems. They have to pee & have no place to go; the kids gets testy & start crying; old people & those with infirmities can’t stand for long periods on cement floors. So what did the police do to calm down the situation? They took truncheons & fire extinguisher hoses filled with foam & sprayed it all over the refugees. Is that what they’re learning from the Israeli military? Or was that barbarism already in their repertoire of aggressions from anti-austerity protests?

So lets get this straight! The EU is bleeding Greek pensioners to pay the German banks which are making billions in profit from the misery of Greek working people. But the EU is dishing out billions to thwart refugees fleeing war, occupation, & plunder. What’s wrong with that picture?

Immigration is a human right. Open the borders. Screw the papers.
Photo is immigrants being sprayed with foam fire extinguishers in sports stadium on Kos.