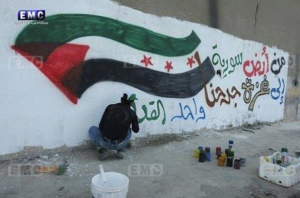 There are protests around the world in solidarity with Gaza but none reported from Damascus. Only reports they’re dancing in the streets celebrating the slaughter of Palestinians in Yarmouk refugee camp. We won’t ask Assad supporters to explain that since their apologetics have exhausted our tolerance for puerile theoretics. We do know there have been protests for Palestinians among civilians of the Syrian Arab Spring uprising, most of whom live under aerial bombardment by Syrian, Russian, & US-coalition bombers. Like this graffiti in Kuftkharim in Idlib which reads “From Syria to Gaza, we share the same wound.”