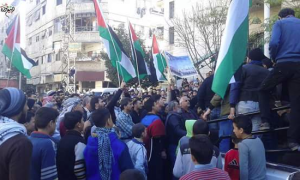 Not wanting to be bested by Putin’s nonchalance over Trump’s provocation of Palestinians, Assad came out slugging: “The future of Jerusalem is not determined by a state or a president but is determined by its history & by the will & determination in the Palestinian cause.” Assad’s indignation & the meaning of this official statement must have been lost in translation so that it only sounds like gibberish. Or maybe he’s just playing it cool in a diplomatic way–not making a roar so much as a peep approximating protest.

Assad’s diplomatic discretion probably explains why there are no reports that Syrians in government-controlled areas have protested for Palestinians. However, protests in solidarity with Palestinians were held in several towns where the revolution against Assad has not been defeated, including in areas presently being bombed by Assad. Maybe one of Assad’s groupies or propagandists could explain this glaring discrepancy in solidarity.