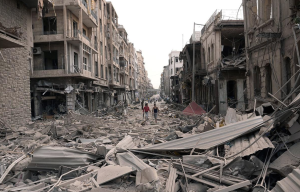 In my FB memories from November 9th, 2012 was a photo album from the Atlantic dated October 4th, 2012 titled “Destruction Comes to Aleppo.”

At that time, an estimated 30,000 Syrians had already been killed in the 18 months of the civil war generated when Assad began using troops & bombers to crush the democratic uprising against his dictatorship. By the end of 2012, the UN reported that at least 700,000 Syrians had fled as refugees.

This little girl is 6-year-old Fatima Qassim being treated by medics at an Aleppo hospital after Assad forces fired on her family’s car on September 11, 2012. Would Assad supporters claim she or someone in her family is one of the terrorists Assad is hunting down with bombs in Aleppo?

The bottom photo is Aleppo after Assad bombing attacks on October 3, 2012. Imagine how it looks now after four more years of bombing.

Keep these images in mind when Assad supporters not only refuse to condemn Syrian & Russian bombing of east Aleppo (where an estimated 250,000 civilians live) but enthusiastically endorse it as a struggle against “throat-cutting jihadists.”