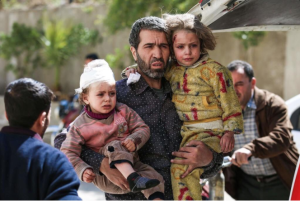 This is a scene from Syria today as a result of Syrian, Russian, & US bombing. Assad supporters are silent on this because they’re so obsessed with vilifying the White Helmet rescue workers. They turn their backs on this carnage to campaign with feigned horror at the imaginary rising tide of Russophobia against children of Russian descent in US public schools.

The evidence provided for this foolishness is the petulant claim of an unknown woman on FB whose child attends a private school in rural Pennsylvania & says he was called a name. What name was he called? Buttinsky? And he mistook that for a Russophobic slur? The school authorities dismissed her nonsense & so would anyone with half a brain. But not if you’re an Assadist who wants to deny that thousands of Syrian children have died by the violence of Syrian, Russian, & US bombs.

End the bombing of civilians in Syria, No foreign intervention. Russia, US, Iran, et al, out now!