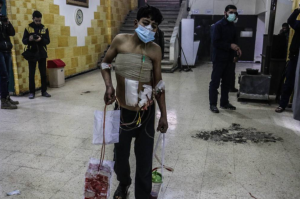 The latest estimate is that 400 people have been killed in Syrian & Russian carpet bombing in Eastern Ghouta since Sunday night. There is no current estimate of the number injured, including loss of limbs. Medicines Sans Frontiers (Doctors Without Borders) reports 13 hospitals & clinics they support have been damaged or destroyed in just the last three days leaving bombing victims like this boy in this kind of situation. It is also reported that ambulances are being bombed. The UN human rights head has risen to the occasion & said the Assad regime is engaged in a “monstrous campaign of annihilation.”

Meanwhile Assad propagandists are heralding the Syrian Army as freedom fighters & pulling one of their switch & baits by refusing to denounce Syrian & Russian bombing of civilians in Eastern Ghouta & Idlib & pretending Damascus is under siege by barbarians & “head-chopping jihadis” at the gates.

Stand with the Syrian people in their fight against dictatorship. Demand the immediate cessation of Syrian, Russian, & US coalition bombing of civilians & the immediate, unconditional withdrawal of all foreign military forces from Syria.